One killed as section of bridge collapses in Cairo

One killed as section of bridge collapses in Cairo

One person was killed when part of a bridge collapsed in northeast Cairo early on Tuesday, state news agency MENA reported.

A fire broke out in shacks under the Al-Sheikh Mansour bridge in Cairo's Al-Marg district and a number of gas cylinders exploded as a result, causing a section of the bridge to collapse. 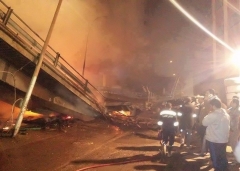 A rescue worker was killed and several other people were injured in the accident.

Another rescue worker was trapped under the rubble, a rescue service official said.

A state technical committee will carry out an investigation into the cause of the accident and evaluate the safety of other sections of the bridge.

Cairo governor Galal Mostafa has ordered the allocation of flats for families whose homes were damaged in the accident, according to MENA.

While inspecting the accident site, Mostafa said the bridge could be reopened in one to two week's time, while the reconstruction process could take a month.

Four metro stations were closed after technicians warned the bridge might fall onto the tracks below, said Abdullah Fawzy, head of the metro operating company.

Otherwise, train movement through the metro line was flowing normally on Tuesday.

Egyptians have long complained about the country's decrepit infrastructure and government inaction to ensure road safety.