Bodies of three children found on a street in Egypt

Bodies of three children found on a street in Egypt

Three mutilated bodies of children were found on the street, wrapped in garbage bags.

The residents of Maryoteya district in Cairo woke up today (Tuesday) to a horrific news, three mutilated bodies of children were found on the street, wrapped in garbage bags.
The outraged residents, who alerted the police, told media that the children were slaughtered and that some body parts were missing.

Online news website ‘Masri Youm’ interviewed a security source in Giza directorate who confirmed the news: “The three bodies of children were found near an abandoned villa wrapped in black garbage bags”.
The security source, however, denied reports that the “bodies had stab wounds or mutilated nor body parts missing.”
From the state of the bodies, which were in an advance stage of decay, the police can confirm that the killings happened few days ago in a different area and were dumped. 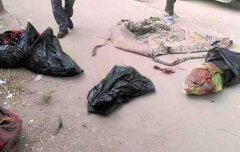 Police are currently working on extracting CCTV footage from the surrounding buildings in the hope of identifying the car or people who have dumped the bodies, also they are looking at missing children reports.
People have taken to social media to vent their anger and shock.

Similar incidents in recent years have been linked to human organ trafficking gangs.

An awful event regardless of where it happens, sub humans to do that to a child.

Such discoveries like this deserve public outrage, unless its just an Italian guy that is discovered in similar circumstances.
Life is your's to do with as you wish- do not let other's try to control it for you. Count Dusak- 1345.
Top

The Ministry of Interior has successfully arrested all suspects believed to be involved in the gruesome death of three children under the age of five, whose bodies were found last Tuesday, sparking fear of organ traffickers.

The arrested suspects are two women and a man, who are all currently under investigation, a senior security source told Al-Ahram.

The source further explained that one of the women is called Om Nely, who is in her mid-thirties and married to a tuk-tuk driver, having moved from Shubra to Giza. The other female suspect is a cleaning maid who moved in with Nely in their three room apartment.

According to the source, the cleaning lady confirmed that the three dead children were her own, though this claim has to be confirmed. Both women went to work and left the children alone with their older brother, who was only five.

On the day of the incident, a fire had broken out in the apartment; according to preliminary information it was likely caused by a Shisha pipe, which was smoked by the husband. The children died of smoke inhalation and burns.

Last Tuesday morning, Giza’s residents awoke to a grisly scene today after the bodies of three young children, wrapped in plastic bags, were discovered in a street close to a popular hotel.

The bodies were found by a young woman heading to work in the early morning, who noticed a dog digging through black plastic. At first glance, she assumed it was just a garbage bag until she saw the dog take out a newborn baby’s head, causing her to start screaming loud enough to alert the neighbors, who gathered in a crowd to find the three corpses.

A preferable explanation other than they were used for body parts, but it still beggars belief that any caring mother could consent to this ‘disposal’ of her children’s bodies in such a cavalier way and by all accounts one was a baby! Life in Egypt is cheap, it is the will of Allah.

I must say, I don't see how this situation is 'resolved'. Justice may seem to be being done but I can't help but think there is much more to it than is written. Whatever did happen though was horrific for those children.

And there we have the all most important words ''believed to be involved.'' They will be found responsible, but probably get shot while attempting to 'escape' captivity. Population pacified, life goes on.
Life is your's to do with as you wish- do not let other's try to control it for you. Count Dusak- 1345.
Top

The UNDP or a related agency did some research quite a few years ago on people living on the street (not in illegal settlements) in Cairo. The numbers were very large and the numbers of young and very young people striking. They suggested in their round about UN language why they were there and what they were doing - which included slave labor and prostitution. The figures were very large and my memory is not perfect but in the high hundreds of thousands for all age groups.

From memory the published report was about 7-8 years ago and nothing happened because, as I guess, the government doesn't want to face up to really ugly issues which reflect poorly on broader cultural attitudes regarding kids being kicked out/abandoned and then misused. Another report indicates that attitudes among the poor to disabled children/babies is pretty confronting and of course the government health system worse than awful.

It may be related but about 3-4 years ago an utterly respectably US funded Cairo street kids program was given a nuclear hit. It was closed down and the US-Egyptian manager of it imprisoned/charged with child sex crimes (possibly there were 2). The American government got quite angry about this because it was pretty clear that this person(s) and co-workers were not doing bad things.

At the time I was puzzled by what the Egyptian government was doing in this matter but as time has gone on I have guessed that its a government that doesn't care about the poor and doesn't want bad stories exposed - least of all by Western funded NGO's. The ejected NGO said Egypt was doing little/nothing which I assume is worse nowadays.

I think its pretty clear but ugly. In third world cities children and street children are treated very badly whether its India, Thailand, The Philippines, Nigeria or elsewhere. Of course it also happens in the west.

I know that al Ahram, English, is only a summary version of its Arabic edition but in years and years I have never read a story of a single prosecution of a person for an employment/slavery type issue with young people or any sexual issues regarding young people. I also note that there appear, in the English version, few if any similar offenses against adults/women. I wonder why.

In this specific matter it would not be unrealistic to assume that the dreadfully poor do not have impossible difficulty looking after children/babies but that hardly explains three bodies in a single situation and that raises more insidious questions that we can be assured the Cairo police will never get to the bottom of-or if they do we will never hear of it.
Top

I've noticed a sudden influx of very young kids begging on the Luxor streets of late, all in a filthy condition.
Life is your's to do with as you wish- do not let other's try to control it for you. Count Dusak- 1345.
Top

Probably Syrians, its easier for them to live undetected... Maybe the rougher they are the more they think they will get. I thought begging was illegal. Someone not doing their job correctly!! Read yesterday that a European had been targeted by youngsters on motorbikes with an air rifle, whats the place coming to!
Top

Yes....I can imagine it's all too easy for some ragged bunch of Syrian child refugees to descend on Luxor.

Only a stones throw from Damascus

The Government thinks the numbers are a deal lower that UNICEF. UNICEF is frank about causes including domestic violence and incest. The government agency responsible for street kids is mad and doesn't take kids as young as 3 years of age into care because, in their own words:

"The law doesn't allow shelters to receive children unless they have a birth certificate,"
Read more: http://www.al-monitor.com/pulse/afp/201 ... z5MidLgvCo

They obviously expect kids living in the street to carry full identification - even if they can't read or write.

Egypt is an asylum that blames others for problems it creates itself.

The story on the kicked out US-Egyptian NGO providing services to street kids.https://www.pri.org/stories/2016-12-28/ ... you-prison
Top

Whilst the regime remains paranoid over the motives of NGO's - particularly American ones - in helping the disadvantaged of Egypt, I see no solution to this problem.

And it's unlikely that putting any pressure on the regime will be high on Trump's list of priorities. His attitude to the children of Mexican immigrants tells you all you need to know on that score.
Top
13 posts • Page 1 of 1