WWE Comes to Cairo this October

WWE Comes to Cairo this October

After January 25 put a halt to the World Wrestling Entertainment's (WWE) plans to make it's WWE Arabia Premier, they are finally making their way to Egypt this October. The WWE world tour will be making a stop in Cairo where they will hold games at the Cairo Stadium for three nights starting October 18. 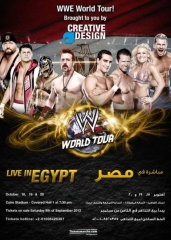 Set to be the first international sporting event since the revolution, Candy Khmer, managing director for Creative Design, the company managing the live events explains Egypt was the first on their list for the Middle East. “As it turns out, there is an even bigger fan base than our research suggested,” says Khmer. “This event will send a positive message out; it's a new kind of tourism, it’s sports tourism.”

The games will feature international champion Cody Rhodes, along with world-renowned wrestlers including Sheamus, Zack Ryder, Dolph Ziggler. American wrestler Rhodes visited Cairo this weekend to get a head start on his opponents.

“As the first to come to Egypt, I am extremely excited […] I don’t know anyone in my locker room who isn't excited,” the World Tag Team Champion and WWE Tag Team Champion Rhodes told his fans during a press conference in Cairo last Saturday, September 22.

Although the international media is filled with news on the instability of the situation in Egypt and the lack of security, the wrestlers insist they’re not worried and Rhodes says he knows the media exaggerates events.

“I volunteered to come — a small group [and I] did. Our time off is actually now, usually, but I had no reservations,” says Rhodes.

Rhodes adds that as a kid he was fascinated with ancient Egypt and to see the pyramids and monuments he’s seen on television and films in real life proved a lot of fun.

“I will do everything I can to give you a show you haven’t seen before, and if you want to find the best looking WWE star, you need look no further than me.”

And he isn’t wrong there; he was voted the Most Handsome Superstar in a WWE.com Divas poll — so mums, don’t totally dread taking your wrestling-gear-clad youngsters.

Son to famous wrestler Dusty Rhodes, aka The American Dream, Rhodes has always been involved in wrestling, starting out as a referee. He believes there’s a charm to WWE that leaves kids, and adults alike, glued to the screens watching it.

“It's sports entertainment,” laughs Rhodes. “There's a misconception that we're trying to be something we are not — we’re entertainment […] I hate to break it to you, Christian Bale is not Batman. It’s just entertainment, I think of it as a dance almost.”

The games are held from October 18 to October 20 in Cairo Stadium complex. Tickets for the live shows can be found at www.Ticketsmarshe.com or check WWE Facebook page for more information.

Oh my god, the young Egyptian men are going to be wetting themselves when they hear about this!!! They all love WWE!!!!

Quite a few older guys, too! Even if they're not sure it's "real".

Ah, nostalgia isn't what it used to be! You forgot Big Daddy and Giant Haystacks, who won by falling on top of his opponent!
I might agree with you, but then we'd both be wrong!
Stan
Top

It was Bert Royal and Vic Faulkner, CE.
So much of the wrestling was a put-up job, but nothing compared to the laughable antics of the modern-day yanks! My favourite was Alan Dennison, who used to actually lose control sometimes and really damage his opponents. His tag-teammate was Sid Cooper, another out and out thug judging by his looks and apparent attitude.
Remember Leon Arras with his "Ask 'im now ref", priceless! Whenever I see him in his acting persona, I'm transported back to those days, and cannot help but smile, no matter how serious he's trying to be.
Top

Ah! Leon Arras who finally ended up in an acting career, appearing on things like Heartbeat. If I remember right Bert Royal and Vic Faulkner were half brothers. The very last bout I saw was Les (The Fox) Kellet fighting Jakie Pallo in Lincoln and Les hit Jakie over the head with the timekeepers bell, it ended up a real bloodbath. There was another well knowm Wrestler, his name was Jim (Crybaby) someone but at the moment his surname escapes me. What made me suspicious sometimes was the fact that Big Daddy whose proper name was Shirley Crabtree often had his brother Brian Crabtree reffing his bouts, coulf there have been favouritism? Incidently when Big Daddy jumped on his opponant it was known as "The Big Daddy Splash"

I would also like to know what hair spray or cream the WWE wrestlers use, because even after all the things they go through you never seem to see a hair out of place, unless your name is Triple H or Kane.
Top
7 posts • Page 1 of 1