Beware of the Jinn

Beware of the Jinn

I come across a website some time ago where they sell books and dvd's etc (I cant remember the site) yet I got this photo while I was browsing it. 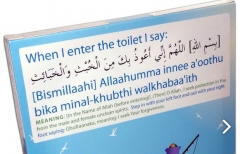 After a bit more research I found many sites talking about what you should do when entering and exiting a toilet. I asked an Egyptain friend and he said, that he follows what it says and that his brother a few weeks ago slipped and hurt is head and arm walking into the toilet the wrong way

I wonder how many Muslims follow this practice, do they really believe there is Jinns in the toilet?

I usually either just take a leisurely stroll into the loo, or adopt a mad dash, depending on the pressure on the nether regions. Slip coming out may be, dependent on the degree of spillage caused by flow pressure, not having my glasses on or being half asleep. The only prayer on my mind would be if I made it in time.
Life is your's to do with as you wish- do not let other's try to control it for you. Count Dusak- 1345.
Top

I have been told to at least knock on the door first, so that the Jinn can hear you and leave the bathroom for as long as you are there.
Top

Superstitious nonsense!
In my job,anyone who actually makes it there under their own steam...gets a round of applause!
Muslims as well!
They're just glad to get there,without worrying whether "Jinns"are in there with them or not!
Top

Jinns in the toilet! Now have about heard it all......

I'd say that given the noises from small tight staccato toots to deep rumbling thunders with associated smells from vague whispy scents to throat gaging get me outta heres any Jinn who opted to hang about in a toilet would definitely be a Jinn to reckon with so I can definitely see where everybody would want to tippy toe around a toilet Jinn.
Top
5 posts • Page 1 of 1