Mahfouz Museum - A Museum to Die For.

Mahfouz Museum - A Museum to Die For.

Mahfouz is revered as he has been for two lifetimes in Israel. https://www.jpost.com/Arab-Israeli-Conf ... ath-467430

Meanwhile in Egypt nothing is done to mark his achievement – no museum, no University Chair, no literature prize or scholarship – nothing. There is not even a biography of him in Arabic (there is at least one but its undistinguished, written by an obscure person and not translated into English) – impossible, nor are there critical evaluations. He is dead and that is the end of it.

There is to be a museum – the Minister made a categorical promise it would be open last December. Its still not open and other than a fake opening probably wont be for a long time. Oddly after considering one of the crumbling and deserted Royal Palaces, Beshtak (well it’s the Museum of Cairo with awful displays and barely open – another Supreme Antiques success) they decided on a mosque complex near al Azhar. Very odd given his novels caused ‘problems’ for al Azhar, given the difficulty of tourists to get there and given that Mahfouz would think that literature and religion – particularly dogmatic religion – were separate.

How do you do an intimate literature museum with small objects in Coliseum like spaces and how do you protect manuscripts without air-conditioning. Why do a museum for a writer in a place not connected with a literature teaching institution unless you have fixed in your mind that whoever is dead – a Pharaoh for example – is just a dead end to be visually inspected/worshiped/revered and never a living idea relevant to activity the present. Its more grandma's glass display cabinet than something that impacts the present and inspires current writers.

This is Muhammad Bek (late Ottoman and not well designed) they went for:

This is the Beshtak Palace they very oddly changed their mind on, it can now be let fall down until UNESCO or the aga Khan coughs up like they usually do: 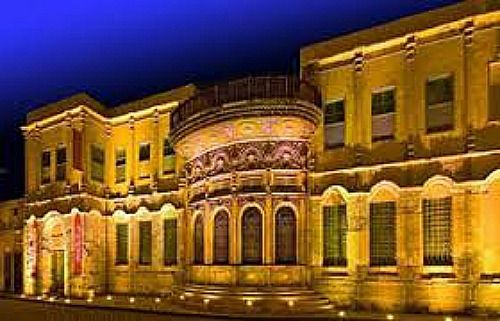 Western journals, magazines and newspapers keep his memory and achievement alive in long and thoughtful articles. There are no literary journals in any language in Cairo – probably because there is no readership, maybe there is no scholarship.

Egypt has problems with talent because it shows up all the rest as 5th raters.

The AUC gives a yearly prize, no money, in honour of Mahfouz which is odd because it was never his university. The winners are rarely from the largest Arab nation and few have gone on to much success. His Cairo University ignores him. I think they prefer to celebrate their 100’s of other Nobel Prize winners and thousands of ever-victorious generals.

When he is mentioned by lunatics like Galal Amin who reckons the Jews tried to assassinate Mahfouz – he’s a not very accomplished economist with no skills in literature or state security – but like many Egyptians the absence of skill or knowledge is no bar to a dogmatic, mad rant. https://www.memri.org/tv/egyptian-intel ... ib-mahfouz

Sales of his novels are low in Egypt but high in Saudi – possibly because all their people can read. http://www.arabnews.com/node/1270311/saudi-arabia and https://www.al-monitor.com/pulse/origin ... sales.html or maybe because he was a liberal internationalist which is now a capital crime in Egypt. His Egyptian publishers and copyright owners lack enterprise, like many others, and never bothered to do English translations or translations into any other language and left this to the AUC and others but took the royalties for their no work.

Things do happen but they are odd. For example the government has its own Mubarak Literature Prize – now the Nile Prize – with an award of E7-10 million. The prize has no standing outside government circles and they usually give it to a bootlicker – there are many of them.

Wait for the joke:
“The top literary prize went to Farouk Shousha, a poet who hosted the “Cultural Evening” TV program from 1977-2006 and who previously won a State Encouragement award for poetry (1986) and a State Appreciation award for literature (1997). He has issued a new poetry collection every few years since 1966.

So an 80 year old TV presenter won over a former Minister – was this a prize for graft or poetry? The TV creature won 4 state awards for collaboration. His poetry was never translated and he received no attention overseas. He was a joke. The Arabs in the Iberian Peninsula and the Crescent once produced the greatest poetry in the world – but little or nothing for 600 years. https://arablit.org/2016/06/07/egypts-b ... k-shousha/ Maybe everything in the country just goes to insiders. I would be interested to see the Egyptian Olympic qualifying trails - maybe they shoot some poor Upper Egyptian kid in the foot so he won't beat someone's son.

They also give the Nile prize in Art to a caricaturist/cartoonist. I guess the judges are low rent or maybe just stupid. Women rarely if ever win a prize. They look for people with no new ideas. It would be interesting to know how many Copts/Christians win state prizes – what’s your guess.

The most prestigious International Prize for Arabic Fiction is associated with the greatest fiction prize in the world, Man Booker, has skilled judges who are not lackeys or ex politicians and aims for the best. https://arabicfiction.org/. Its trustees lack one thing – an Egyptian education – maybe that’s why they are good. The Awards include training workshops for young Arabic writers. Egypt doesn’t do that and blows the budget on a reception for great and powerful (powerless) people – themselves and usually men. The Arabic Fiction/Booker rewards creativity and change and doesn’t have grand functions for useless hangers on.

The European Bank for Reconstruction sponsors a fiction prize for Arabic countries together with the London Book Fair – where the British Army has no stall. Turkish writers do well probably because of literacy and a buying public which is an educated middle class. They have nothing to do with Egypt in this and no Egyptians on their selection panel. They look for change and new techniques.

The Sawiris Culture Awards in Egypt are no more honest than their owners. Their Board includes one dead person – and Hawass. They have no objectives or criteria and no description of the selection process other than the entertainment festivities. http://sawirisfoundation.org/projects-p ... ral-award/

The winners are backward looking, uninnovative writers who toe the line and present an image to the world that these crooks have culture and sophistication. Their Gouna Film Festival tries to do the same thing – and fails.

Their literature award is standard Cairo farce which most in the audience couldn’t care less about. :

There are possibly 2 persons in the photo under 40 – plus the young servants. Given the ‘political problems’ of the Sawiris family I think the awards have been discontinued – but the web site is incoherent – a bit like a Sawiris business strategy in North Korea/Syria/Iraq/Pakistan and their foul Russian oligarch/murderous friends/business partners. Canada was so right to send them packing for national security reasons and tell them to never invest in Canada. I think the striking woman in the front row is the actress, can't remember her name, who appeared in film Yacoubian Building and goes by a single name. An actress in the front row of a literature prize - what sense that makes. Why not a soccer player?

There are dozens of other Arabic literature prizes outside the Middle East with clear standards and looking for new ideas not just repeating dogma back to the ‘Pope’. http://www.arabamericanmuseum.org/2017. ... rd.winners

Re: Mahfouz Museum - A Museum to Die For.

Very sad. Of all the Egyptians I know, none of them read for enjoyment, and only grudgingly for education. A few read newspapers.
Carpe diem!