I find it interesting that the Muslim world is so divided, albeit on borders designed by westerners, and has poor knowledge about the giants of their own past – wherever they lived. The hate or envy seems to divide them from their common past. On the other hand the west cares little about borders and worships German Goethe, Russian music and literature, Italian films and stars, Indian Mughal architecture, Venezuelan and Argentinian writers and Broadway musicals and black jazz. One culture is open and curious, the other is closed – except for bad US films and music. One looks back to its past the other averts its eyes except for Tut and other shiny, simple things.

Its also interesting that mere poets (and novelists that aren’t mentioned in this post) are seen as dangerous and in need of suppression or elimination. How fragile things must be to be frightened of poems.

There are few awards for general Arabic literature of science and the ones that exist are low rent and politically driven. Contrast this with say the Booker that gives awards to Africans, Australians, Indians and others on shared language and colonial heritage. Similar rules apply to the French awards given to Francophone writers in the Middle East and Africa. There is a high status international prize for literature in Arabic – but its run and funded by the perverts who run the Booker in Egypt, has a first class jury and doesn’t, like Egypt does, give literature prizes to Junta stooges and ex-Ministers. https://www.arabicfiction.org/ Soeuif is on the selection panel but she loathes Sisi. Egyptians don’t do well with this prize possibly because they are not much good.

Poetry is not completely dead in the region although its practitioners have evacuated yet are still denounced. The Syrian Adunis/Adonis from a very humble family, Alawite, trained by the Jesuits, got out, taught at Georgetown and the Sorbonne, expelled by Arab Writers Union (their membership qualifications are – can’t write), death threat/fatwa (unclear which) from Egyptian Salafi sheikh Mohamad Said Raslan, other death threats from Syrians, calls for book burnings from Algerian Salafi ‘scholar’ (who is illiterate), a public supporter of the Arab Spring and likely future Nobel Prize winner. His style is direct and simple, his poems generally short and the subject matter uncontroversial to me. Has received UAE, Lebanese and Turkish awards but none from Egypt. Many awards in the west. https://www.poetryfoundation.org/poets/adonis

The major literary magazines in the world think he ‘remade’ Arabic poetry – the Arabic world ignores him, no Cairo publisher prints his poetry, the AUC neither prints nor sells him, he has received none of the Egyptian prizes which bark the motto ‘Cairo is the center of Arabic culture’ – it isn’t and never has been. https://www.newyorker.com/magazine/2017 ... bic-poetry. Cairo’s literary, philosophical and scientific contributions since Alexandria ceased to be the intellectual center of the west, say c. 500AD – have been small possibly zero – that’s a 1,500 year Dark Age relieved only by the mismanaged and western funded new Alex Library – now under the management of a fool. After truck loads of western money its holdings are less than a million books, smaller than a provincial university library, and less than Alex in classical times. The French gave 500,000 books in 2002 so 16 years later the local management haven’t even done that. Its interesting that in his case, the Rushdie case and others, al Azhar has never criticized a death/murder/killing fatwa. What type of religion is it that doesn’t condemn the murder of a person for his/her views? Are there no such killings that al Azhar disapproves of?

The expatriate Syrian Christian Sargon Boulus published little but is well regarded. He also translated into Arabic at least Pound, Auden and Shelly but I have difficulty tracking down copies of these – possibly because local publishers – many state owned – are really incompetent. https://www.poetryinternationalweb.net/ ... gon-Boulus

The minor Egyptian poet Ahmed Fouad Negm d.2013, more song lyricist that poet was imprisoned multiple times by every president since Nasser for ‘criticism of god’s appointed’. Because of his death in 2013 Sisi lacked an opportunity to imprison him.
https://i.guim.co.uk/img/static/sys-ima ... d77eb4c6d3

Other Egyptians. Ahmed Rami d 1981 was the lyricist for The Voice and a poet, little is known about him but if he had a brain he, also, was probably locked up. Iman Mersal b 1966 got out as soon as she could walk, hasn’t been back and has a successful career as a poet in Canada. Edmond Jabès was expelled by Nasser as a Jew and went on to a successful career in France, Legion of Honor and winner of France’s greatest literary prize. Andrée Chedid, a woman, got out as soon as she could crawl and won the Goncourt twice and the Legion d’Honor as a Grand Officer, died 2011.

Bernard de Zogheb was an Alexandrian Syrio-Lebanese, lived most of his life in Egypt and who died in Egypt in 1999. He’s a difficult chap to categorize. Painter, poet and librettist and a deal more. Highly civilized, interested in wide Mediterranean cultural perspectives, charming, well connected etc. Of course he gets little attention in Egypt because he was un-authentic Egyptian – a Western Christian with foul blood-lines who thought that after 1952 pygmies and thieves ran the place. https://cloudfront.escholarship.org/dis ... 31n9vc.pdf and http://weekly.ahram.org.eg/News/13752.aspx and http://weekly.ahram.org.eg/Archive/1999/444/cu4.htm

Andre Aciman the distinguished writer and US Professor is not a poet but a writer about Alexandria in its hay day from which Nasser kicked out his family as Jews. He is straight but has written on gay themes so he would be imprisoned, along with the Eire PM, if he visited Egypt.

I can find not one poetry prize in the region although there are many other prizes for translation and novels. In Egypt such general literary prizes as there are seem to go to insiders and quite brazenly to nonogenerian ex-Ministers. This should surprise no one because there only state art prize and its for cartoons – political and related – usually ‘awarded’ to those who do ‘nice’ things for the government. The selection panels for the various Egypt prizes are stacked with people with no skills – except in politics and boot licking. Whilst the other regional prizes are not restricted by nationality the Egypt prizes, including the low credibility Sawiris prizes, are subject to blood and DNA tests on ‘racial authenticity’.

If you left or got kicked out and did well you get no attention in Egypt unless you come back with money (like one heart surgeon) or are prepared to lick boots.

Significantly many Egyptian writers after 1952 abandoned writing to become well paid and powerful state journalists, state newspaper editors and propagandists. Some joined the diplomatic corps or bureaucracy to display Egypt’s ‘cultural standing’ and to their advantage - a lot like the appointment of women to trivial but visible cabinet posts. Co-opting works. People are easily and cheaply purchased and Egyptian intellectuals are the cheapest.

If its any consolation Stalin was worse, much worse, and regularly killed, imprisoned, tortured or cast out writers he didn’t like. Not even winning a Nobel Prize – Pasternak – gave much protection just as, more recently, the Chinese lock up their Nobelist and let him die. Egypt should learn from its new best friends – Syria, North Korea and Russia. Stalin killed thousands of intellectuals and poets, scientists, lawyers – so many that the trash that was left alive – including himself – looked outstanding – well at least they were standing up. His big achievement was to round up and kill 13 (some say 15, some 30) poets (all dirty filthy Jews long hated in Russia and other places) on one night in 1952 in the great Lubyanka KGB head office which stands there today on Red Square, a former work place of Putin and still the head office of its successor the FSB. Khrushchev to his credit denounced Stalin as an animal (but many western Communist Parties did not) and cleared these poets.

Here is the Lubyanka that protected Russia – or protected the Junta. There is a similar building in Garden City in Cairo crawling distance from the UK Embassy.

The story of the great poet Anna Akhmatova is well known in the UK because Isaiah Berlin met her in hiding and told the world that this old woman in a St Peter’s slum was a giant in art and personal heroism (1st and 2nd husband’s killed and son sent to the Gulag). Her friend the poet Osip Mandelstam, multiple arrests, sent to Siberia starved and died remembered by his genius of a wife in her great ‘Hope Against Hope’ and ‘Hope Abandoned’ – although these and thousands of others were abandoned by intellectuals in the west – particularly leftists and communists like Auden. Marina Tsvetaeva (poet of the first rank, similar Russian story of defiance/treachery, state deaths of everyone she loved and was denounced by the great Arts Tsar, Stalin, in typical Egyptian fashion – then killed herself as many other dissenters did).

Composers, singers, pianists and classical performers were persecuted on a whim – often for nothing. Scientists including the greatest living plant biologist in the world (Vavlov) were killed because they disagreed with ‘communist science dogma’ (genes don’t exist, now having a resurgence under Putin).
https://www.splendidtable.org/story/how ... starvation. It was a madhouse as some countries still are locking up people and driving others out. Berlin’s 1945 private report to the governments of the west on the bloody and vicious ‘cleansing’ of ‘Mother Russia’ is long, sober and elegant. He could write because he could think although in Egypt he would be a dirty filthy Jew but also Russia hated Jews.
https://www.nybooks.com/articles/2000/1 ... er-stalin/

Anna Akmatova didn't kill hersulf and since her death a long time ago poets and composers, some of the greatest in the world, have composed works to memorialize her bravery and genius in the face of animals who wanted only subservience.Here is Anna, all St Petersburg style and none of the Moscow pig farm about her. 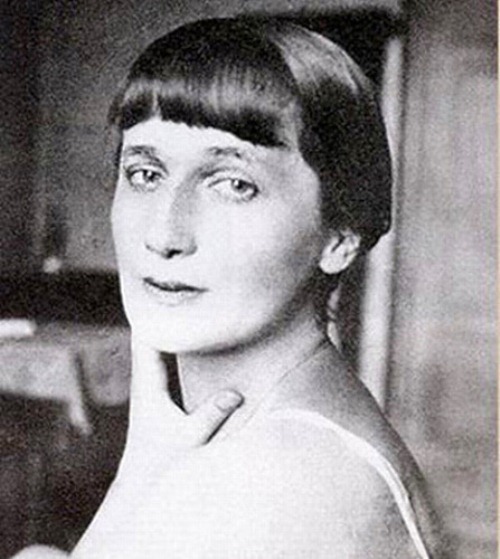 I think the Communists cleaned up all the blood and bodies in the Lubyanka basement or at least walled up certain rooms and concreted over the graves and now Putin, who worked for them when they were animals, is proud of the KGB and this tells you all you need to know about him. https://wayback.archive-it.org/2410/201 ... /ussr.html

Which people a country regards as heroes tells you most of what you need to know about that country and its people. It also tells you a lot to know about why some were scrubbed out.

The cleansing of Egypt began under Nasser but is accelerating in the last 5 years made worse by blocking the web and monitoring all web activity.

The crackdown on books and libraries in Egypt (with attention diverted by absurd travelling government libraries and other stunts – it works, most are deceived)

Close down of other libraries and suppression of books. https://www.theatlantic.com/internation ... ch/547259/