Is the govt covering up the cause of the fuel shortage?

Is the govt covering up the cause of the fuel shortage?

Egypt has been in the grips of an on-again, off-again fuel shortage for over a year now, with massive lines outside gas stations across the country causing headaches for drivers and sometimes even violent confrontations. 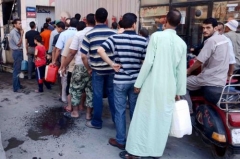 It is frequently portrayed by the Petroleum Ministry as a passing trouble to be dealt with in a matter of days, but the problem, which many blame on the political unrest of the last year and a half, has much deeper roots than the government’s petroleum authority lets on.

The ministry has actively worked to hide the country’s petrol shortage and may even be lying about the amount of gasoline it distributed to avoid blame for the devastating and long-term lack of fuel.

In May 2011, reports emerged that Egypt’s service stations were having trouble meeting demand. The city’s microbus drivers, who use diesel fuel, were the first to feel the pinch.

The summer season is typically a tight time for petrol supply, due to the gas-guzzling machines used in the cotton harvest.

But the shortage, apparent from the long lines at stations throughout the country, was not officially recognized by the government until four months later.

In September 2011 then-Deputy Prime Minister Hazem al-Beblawy told Al-Masry Al-Youm that the shortage of gasoline and diesel is “a big problem.”

While Beblawy acknowledged the existence of the fuel crisis, the Egyptian General Petroleum Corporation continued to deny the problem. It insisted that it had supplied adequate quantities of fuel to each governorate. Over the coming year, the country would see at least three more widespread shortages, slowing transportation and raising the prices of other goods and foodstuffs.

This summer season, already hectic with election fever, has only seen worse shortages and longer lines, with diesel, the gasoline 80 that is commonly used by taxis, and other fuels all but disappearing from many pumps.

The coincidence of the elections with the latest shortage has led to conspiracy theories that the short supply is calculated to scare voters into casting their ballot for former Aviation Minister Ahmed Shafiq, who has promised to usher in an era of stability and security.

But the shortage seems to be an entirely separate cause for distress. In the Upper Egypt city of Minya, on the first day of the presidential runoff, gas stations had longer lines than polling stations.

Indicators show that the fuel crisis is unlikely to be alleviated soon, no matter the result of the elections. The problem goes deeper than politics.

Open, but without petrol

On a hot June day, a privately-owned gas station in Giza opened, facing yet another day without any gasoline to sell. The service employees stood idle, only springing into action when a customer came by for a car wash.

“There’s nothing more I can do,” the manager told Egypt Independent, speaking on the condition of anonymity because he said he could be fired from the multi-national company for speaking to the media.

He said his employees have stopped showing up on days where there is no gas to pump. The manager sometimes sees them watching from afar in the morning, to see if the pumps are working. If they aren’t, they return home.

“It’s hard on them, because they earn most of their money through tips,” he said. With no gasoline to distribute, there are no tips.

The most recent decline in supply has lasted about four months, the manager said.

During this period, the late-night deliveries of the gas he ordered usually arrive as scheduled, but with only a third or quarter of the amount he ordered. When he calls the distribution center, they tell him they’ll take down his order but they can’t guarantee how much actually arrives.

He said he’s not sure how much longer the station can remain open if it doesn’t receive consistent deliveries.

He also blames the local media for stoking fears of shortages, which only exacerbate the problem, as people horde fuel.

The Giza station manager said he had seen customers in the upscale area his station serves wait in line for hours to top of their tanks with just a few liters.

“When I ask them why, they don’t tell me, but I know it’s because they think I won’t have gas tomorrow,” he said.

Re: Is the govt covering up the cause of the fuel shortage?

For me, the most intriguing aspect of that report was the following...


He said his employees have stopped showing up on days where there is no gas to pump. The manager sometimes sees them watching from afar in the morning, to see if the pumps are working. If they aren’t, they return home.

“It’s hard on them, because they earn most of their money through tips,” he said. With no gasoline to distribute, there are no tips.

Does that mean the employer pays such low wages it's not worth turning up without the chance of tips (though the reporter does say that there were staff there standing around idle)? Or are the workers watching from afar not actually paid any wages at all? One more example to put on President Mursi's social justice agenda?
Top

Re: Is the govt covering up the cause of the fuel shortage?

Here in Luxor (East Bank) when the petrol stations are closed you can see the guys who work there sitting in a group near the back of the petrol station. drinking tea, playing on their phones and just chatting away to one another, ive been enough times to all the petrol stations to know its the same people who are sitting around each time I visit. I think these are the permanent workers who probably get paid a fixed wage each month. I think the ones that might be watching from afar is the younger boys that dont get paid a wage, they just help out (when there is fuel) and get tips only.