The snake hunters of the Refai Sufi order

The snake hunters of the Refai Sufi order

The ancient profession is founded on the need of people to render their environment safe. Snake hunting in the tradition of the Refai, a profession that grew into a form of Sufism, requires piety and a deep sense of religion. 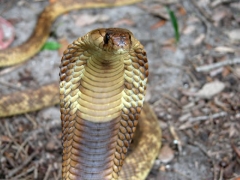 The snake hunters of the Refai Sufi order follow an ancient tradition that is still very much alive. The privilege of becoming a snake hunter, or el-hawy, is often a family tradition, yet the blessing of a sheikh of the Refai order needs to be sought before the applicant is deemed worthy.

The ancient profession is founded on the need of people to render their environment safe. Snake hunting in the tradition of the Refai, a profession that grew into a form of Sufism, requires piety and a deep sense of religionof those practicing the profession.

According to an ancient myth, an enormous snake blocked the passage of a main route in Iraq. Travellers and passers by were terrified, yet no one dared to confront the snake and clear the passageway. The only one brave enough was the young Sheikh Ahmed Al-Refai, who, according to the legend, subdued the snake using his sublime divine power. The revered profession of snake hunter has been linked to the Refai Sufi order ever since.

“The Grand Sheikh’s blessings will not be useful unless the hunter himself respects all the Islamic rules, such as not to drink alcohol and not to fornicate” snake hunter El-Tayeb Morsy told the Daily News Egypt. Another strict rule is that the el-hawy is never paid for his services and must be devoted to help whoever asks for his skills, otherwise the covenants are considered broken and the snake hunter will be deprived of the blessings. “I have never accepted any pay or reward for what I do. We do not even ask for a little water to wash our hands. Allah’s acceptance is our only reward,” said El-Tayeb.

El-Tayeb Morsy has been a snake hunter for more than 40 years. He inherited the profession from his father and his son Mohamed has now become a snake hunter as well. El-Tayeb’s ability to hunt scorpions and cure poisonous bites is possible, according to him, “only by the will of Allah and the blessings of The Grand Sheikh Ahmad El-Refai.”

In Tanta, the city located in the centre of the Nile Delta, the head Sheikh of the Refai Sufi order tests each el-hawy before he is accepted as a snake hunter. Once he is, he is subjected to the Kerfa, which means receiving snakebites in both ears. After this ritual, the el-hawy is considered safe from any venom or poison for the rest of his life.

An el-hawy of the Refai knows exactly 124 spells, which are all attributed to Sheikh El-Refai himself. Each spell is for a specific occasion and situation and there are spells for dragons, snakes and scorpions and the el-hawy believes that the hunting and taming of snakes is easier if he uses these sacred spells.

Many people, especially in Upper Egypt, still resort to the el-hawy to hunt the snakes that may be hiding in their homes or cure venomous snakebites. They believe in the spiritual abilities the snake hunters have gained due to their piety and strong faith.

“It is all about skill and self-confidence,” said Abdul-Menem Abdul-Azim, journalist and head of the Upper Egypt Traditions Studies Centre located in Luxor. Abdul-Azim argues that the traditions and spells are no more than myths and superstitions, preserved in people’s minds generation after generation until they turned into facts.

Not all snake hunters are true professionals. Some resort to tricks to deceive people, claiming to hunt the snake, but grab one in a swift move from his own pocket or sleeveto show as the result of their expertise. They raise snakes like any other pet and train them to obey and follow their orders. Needless to say, they are not considered true el-hawy.

Interesting article and the thought that Dusak's friend should consider getting one of these Snake men.....

I really like these Allah get out clauses. Covers all those oops moments with instant impunity.

I've often wondered if they get "do overs" granted by the great oneness in the sky when they're just learning?

I've always come to understand if you yell "do over" before you're done you get another try......