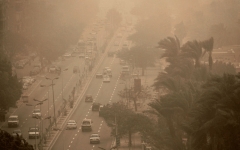 Woefully unequipped for heavy rainfall, Egypt suffers flooding and power outages due to inclement weather expected to last until Thursday.

A number of flights were cancelled and others rescheduled at the Cairo International Airport on Wednesday after heavy rains caused flooding in the Egyptian capital, delaying travellers making their way to the airport.

In the capital's Giza district, the governor's office provided 12 cars to pump floodwater off roads to facilitate traffic flow.

Roads in Alexandria were also flooded with rainwater.

The Tahrir Doctors, an informal group of physicians formed during the January 25 Revolution to treat wounded protesters, called on officials to "save the drowning towns" of Alexandria, Upper Egypt and the Nile Delta.

In a statement, the group noted that flooding had brought traffic to a standstill in several parts of the country, in some cases preventing patients from reaching hospitals for treatment.

The city of Beni Suef suffered a complete power outage due to the downpour. An official source told Al-Ahram's Arabic-language news website that the rain had caused the electricity networks feeding the city to malfunction. Work is currently underway to fix the problem.

South Sinai also witnessed heavy rains, blocking primary highways for over three hours, including the Ayoun Mousa Road, the Ahmed Hamdy Tunnel, the Abu-Zeneima Road, the Abu-Redeis Road and Wadi Firan Road. At least one car accident was reported in the area.

Maritime ports in Nuweiba and Sharm El-Sheikh, however, were not affected by the weather.

The town of Saint Catherine in Central Sinai, meanwhile, has been completely covered in snow.

On the Red Sea, the city of Ras Ghareb has only witnessed light showers, despite warnings from meteorological experts that an increase in wind, sand and dust would reduce horizontal vision by some four kilometres. The Hurghada airport is reportedly functioning normally.

Heavy rains also affected the Suez governorate, where the streets – especially those of the Faisal district – flooded over with water. Governor Samir Aglan has ordered an investigation into the cause of the flooding following numerous complaints about faulty road infrastructure.

It is expected that the cold and wet weather conditions that began on Tuesday will continue until Thursday.

Ahh!! So that's why the internet is C--p
Top

At least it keeps the dust down.
Top

There was no rain in Hurghada, although it was very windy. Nevertheless when we tried to get a 5.30pm Superjet bus from there to Luxor yesterday we found it was cancelled apparently due to flooding on the road. No problem with the bus this morning though.
Top

Chocolate Eclair wrote:Ahh!! So that's why the internet is C--p

That's why I cannot Skype my husband.

Thought so; bad weather always does this.

We are expecting a little weather here, too... :worry:

Oz is certainly having a time of it, what with fires and Cyclones..

I have a little brother out there somewhere in Oz, not seen or spoken to him in years, he's a lucky sod, so he will be fine..

We only have 2 types of weather here in North Wales.

Permanent wind, and it's either Rainy, or Cold. It's character building, so they say.

Bullet Magnet wrote:
We only have 2 types of weather here in North Wales.

Permanent wind, and it's either Rainy, or Cold. It's character building, so they say.

We have three types of weather here in Copenhagen: I walked to the hairdresser this afternoon - in the rain. After a haircut I walked to a supermarket - through hailstones. Walked home from the supermarket - it snowed. Now I have very curly hair.

"Now I have very curly hair."

You must have been eating your crusts, BENNU!
Top

You must have been eating your crusts, BENNU!

I am sorry to stay off topic, but I had to look up that expression. I had just returned from the kitchen with Norwegian cheese on a type of Swedish rusk which translates "crusts".
:cuppa:
Top

You must have been eating your crusts, BENNU!

I am sorry to stay off topic, but I had to look up that expression. I had just returned from the kitchen with Norwegian cheese on a type of Swedish rusk which translates "crusts".
:cuppa:

It is an old wives tale (used by mothers to get children to eat the crusts of their sandwiches, not just the middle i.e. waste not want not), that if you eat your crusts your hair will be curly.

As a child in the UK BENNU your mother always told you to eat the crust from the edge of the bread as it would make your hair curly. This was purely to prevent wast of food from times gone by when food was scarce. In later years many a mother had to make a pubic apology as most curlies ended down south.
Top

WI, I could never imagine you to lower yourself to refer to pubic hair in public!!!
Top

Great minds think alike Winged Isis, but you finger was quicker than mine this time.
Top

The past week’s unusually cold and turbulent weather has reportedly killed eight and injured seven, including three tourists.

Gusting winds caused two laborers in Damietta to fall from a bridge this week, causing one death. In Assiut, five died after their house collapsed in the Dairout district.

In Daqahlia, two police officers died on the Ismailia-Zagazig highway in a car crash that was caused by the inclement weather. Two others were injured in the same collision. In South Sinai, three French tourists were injured after their vehicle turned over on the Saint Catherine-Nuweiba Road.

Four ferries that were to transport 700 passengers were kept in dock at the Red Sea due to high waves and strong winds.

In Alexandria, trains coming in and out of Abu Qir station were partially disrupted due to water covering the railway tracks after heavy rains.

General Authority for Meteorology official Ali Qotb told Al-Masry Al-Youm the the weather is expected to improve in the coming three days. Wind gusts should die down and rainfall is expected to be limited to the North Coast and North Sinai.