Crocodile numbers in Egypt's largest man-made lake have slumped dramatically due to illegal overfishing and poaching amid the current security vacuum, a nature reserve official has said.

Studies show crocodile numbers in Lake Nasser have dropped by half over the past few years, Mohamed Ezzat of the Nature Reserve Authority in Upper Egypt said. 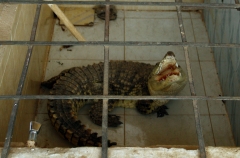 A pet crocodile in a Nubian home in Upper Egypt

Only 41 crocodiles were found recently in Khor Korosko, part of the lake where crocodiles live, compared to 81 three years ago, he added.

Lake Nasser is a huge reservoir in southern Egypt, created when the Aswan High Dam was built in 1970. It is one of the largest man-made lakes in Africa, and is famous for its varieties of fish, birds, mammals and reptiles.

Fishing in the lake is banned pursuant to the CITES agreement (the Convention on International Trade in Endangered Species of Wild Fauna and Flora) that Egypt recently signed.

even the dogs wouldnt eat it - -
Top

Probably perpetrated by some snap happy opportunist visualizing a crock of gold.
Life is your's to do with as you wish- do not let other's try to control it for you. Count Dusak- 1345.
Top

Yet another example of human selfishness and greed, and lack of compassion towards other sentient beings, they won't be happy until all species but humans are extinct.
I don't have a plan......so nothing can go wrong!