The clashes between families of the Al-Halayel and Al-Dabodeya tribes also left 40 injured. Police managed to briefly stifle the armed fighting, but clashes resumed shortly after.

Those injured Friday were transported to Aswan University Hospital under tight security to avoid acts of vengeance from both sides, MENA reported.

Family feuds in Upper Egypt are not uncommon and can last across generations.

It was a Helen of Troy situation all over again as tribal fighting in Aswan – sparked by a woman – has resulted in the death of at least 25 people so far. Violence broke out last weekend when a group of students started a fight after a man verbally harassed a woman from another family. 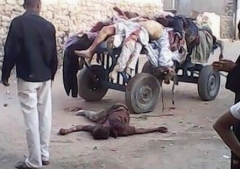 After an attempted reconciliation meeting between the families of Al-Halayel and Al-Dabodeya, who have a long-standing tribal dispute, went sour on Friday, negotiations broke down after a verbal argument and the situation rapidly turned into a full-on shootout between the two tribes. Fighting continued onto Saturday, with both sides using not only gunfire but petrol bombs, and several houses were burnt to the ground before police were able to stop the clashes. Over 40 people were also hospitalided, but the fighting was eventually broken up when the armed forces, along with the executive authorities of the Aswan governorate, intervened, according to Egypt's army spokesman Ahmed Ali, who also says that the crisis is "being contained." Prime Minister Ibrahim Mahlab and Minister of Interior Mohamed Ibrahim also flew to Aswan on Saturday to handle the situation, and 17 schools in the area near the conflict were ordered to close today by Aswan's governor, speaking volumes of the severity of the situation, which police say is the worst in tribal violence they've seen in a while.

Update: As the violent clashes between the two tribes escalates, leaving another two dead and four injured today as clashes re-erupted, a State of Emergency has been declared in Aswan. The governor has also requested that the president implement a curfew as soon as possible, in an effort to prevent further violence., which extended to the Corniche, with cars also being set ablaze.

Egypt's Ministry of Interior has announced that even more reinforcements are being deployed to Aswan to aid with the situation, additional to those who were sent yesterday. Both tribes have allegedly claimed territory, with images showing roads leading to the Aswan airport being shut down by the Halayel tribe while railway lines have been blocked by the Dabodeya tribe.

All very similar to family feuds in Mosside the Gorballs even Tottenham..

Who2 wrote:All very similar to family feuds in Mosside the Gorballs even Tottenham..

Except for the presence of donkeys & camels

My friends sister that recently got married moved to Aswan with her husband that hails from there. He is self employed, providing disco's for any event. He used to earn enough to keep himself and wife who is now pregnant , with a comfortable living. But no more. The rioters burnt down his small work shop that housed all his equipment. She, the wife, needs regular check ups in relation to the pregnancy but is to frightened to leave her home. She spoke last night to my friend and according to her over twenty schools have had to close and the death toll is now over thirty including one police officer. They say that the pen is mightier than the sword, in this case a few words can decimate.
Life is your's to do with as you wish- do not let other's try to control it for you. Count Dusak- 1345.
Top
5 posts • Page 1 of 1