Egypt's poorest risk death for promise of work in Libya

Egypt's poorest risk death for promise of work in Libya

In a bare room with nothing but a small pillow, a few pots, and a sheet to cover the dusty floor, Youssef Abdullah's family was living in an impoverished Upper Egyptian village when they were told he died in the Libyan desert.

Abdullah was one of at least 22 Egyptians found dead this month, perishing from heat and starvation after trekking through the Libyan desert by foot in search of jobs they could not secure at home."Youssef's circumstances were very bad. If he found work here he wouldn't have traveled. I wish I had stopped him but I wasn't able to ... he traveled without me knowing," his father, Abdullah Mahmoud, told Reuters. 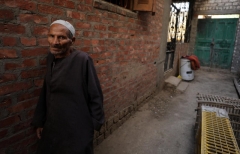 The Libyan Red Crescent said the bodies were found in the Jaghbub desert, some 400 km (250 miles) south of Tobruk.

Many of them came from villages in Minya, an impoverished province south of Cairo, where residents say poverty and unemployment have been driving villagers to put their lives at risk to find work of any kind, even if it means contending with the lawless chaos of Libya's civil war.

Egypt last year began sweeping economic reforms as part of a three-year $12 billion International Monetary Fund loan program, floating its pound currency and slashing subsidies in a bid to lure back foreign investment that fled after its 2011 uprising.

But the measures have pushed inflation above 30 percent and slashed purchasing power.

"Conditions are as bad as it gets," said Abdullah's mother.

Abdullah made about 50 pounds ($2.70) a day working as a farmer, but that work was not available every day.

Before Libya descended into civil war, Abdullah's brothers had traveled there for work, returning with enough money to build a modest two-story brick home.

When Abdullah was unable to come up with the money to build his own, he decided he too would go to Libya.

To get to Libya, Abdullah and others from his neighborhood paid a broker from a nearby village, who took money in exchange for providing what he said was legal passage, the families Reuters spoke to said. He then passed them on to smugglers who left them in the Libyan desert without water or food. The broker, who charged 5,000-7,000 Egyptian pounds for the service, remains free. Residents said he threatened revenge if they reported him to authorities. Among the other victims was Ibrahim Abushusha, a 26-year-old man who worked as a day laborer and had married just six months earlier.

His brother Khalid, who himself returned from Libya when security there deteriorated, described the migrant brokers as "traders of lives" and "blood dealers". He warned Ibrahim not to deal with them."People pay 7,000 pounds to head off to Libya ... in order to die ... After Ibrahim died the broker spoke to his father and told him 'prepare the money, your son arrived'," said Khalid."Why do young people travel like this and throw themselves into the fire? It's because they don't find anything here. There are no job opportunities making them stay," said Khalid.

Though official unemployment figures show the jobless rate at around 12 percent, young people remain disproportionately impacted by the jobs shortage, which economists say is likely to be much higher in reality.

President Abdel Fattah al-Sisi has pledged to reduce joblessness to 10 percent over the next few years, but economists say that would take higher economic growth.

Among the survivors was Said Abdullah, who dug his 17-year-old son a grave by hand in the desert after he died. Samir, Abdullah's brother, described what happened as human trafficking, the result of the poor getting even poorer because of economic austerity. "The state is not helping the people ... the rising prices that we are dealing with. Every so often they tell you, just wait another six months, and then prices go higher again," he said. Family members of victims said they were unable to obtain official death certificates, which they need to apply for social security.

"The state is supposed to help us in getting the death certificate. But they don't help us in death or in life," said Samir. Egyptian Migration Minister Nabila Makram said in a statement last week the deaths were "tragic, unfortunate and painful and speak to the danger of illegal immigration".

"The ministry is combating illegal immigration by seeking to provide training, rehabilitation and employment opportunities for young people from the poorest provinces with the most emigration" it said.Egyptian authorities have issued scores of warnings against travel to Libya, but Egyptians often do not adhere to the advice.

Despite the deaths, youths are still undertaking the journey or considering the prospect.When Mohammed Jamal, a 26-year-old unemployed relative of Youssef Abdullah, was asked whether he would travel to Libya if given the chance, he said: "Of course." "(But) if I found a job and a decent life ... why would I leave?"

What I've never been able to understand concerning all that pay this kind of money over, more often than not, even larger sums from those that have very little or nothing, is why not keep these small fortunes and carry on living and carry on looking for work. If this man paid over just the 5,000Le, it at least would of helped him survive with hope for a little longer. Or is it a case of throwing all you have into these death marches as there is no hope left. I know for a fact that the farmers that own the crop fields near to my friends house used to pay what was considered a good livable labour wage, but now he only pays a small amount with plenty of takers as the sales, or so he says, of his produce has dropped so much he has to counteract the losses by offering lower wages. And he is seen as a ''good man.'' Why not lower the cost of x kilo to at least sell all rather than letting it rot away.
Life is your's to do with as you wish- do not let other's try to control it for you. Count Dusak- 1345.
Top

One of these guys said his brother had worked in Libya and came home with enough money to build a small home. If your young strong and can not find work then the temptation to go look for it in the "promised land" must be over whelming. Desperate times call for desperate measures.
The families must scrape together all that they can to finance their men folks journey only to lose their sons and the money too.
What an absolute tragedy and how can these monsters who abandon people in the desert, to their almost certain death, live with themselves.
No one really cares about the poor though.
Top
4 posts • Page 1 of 1