Seems a good idea – if well planned. But no its another sad joke of an event run by people with no relevant skulls or responsibilities and for god knows what reason except ego and media/political profile. More a media event than substance. (you sometimes wonder whether a lot is done to just give the appearance of power/decisiveness rather than actual implementation)

In March a water conference at an expensive (paid for by the taxpayer) hotel run by “Ministry of Immigration and Egyptian Expatriates Affairs, the Luxor governorate” God what do they have to say on this matter – the Governor’s skills were previously polishing Sisi’s shoes and agreeing with him.

If they were prominent in this difficult field their names and universities/awards/famous employers would have been mentioned. I think they were nobodies paid to provide a ‘prestige’ background for insignificant local Ministers.

There is no evidence that farmers (86% of usage), corporations that produce water technology, scientists that deal with water pollution, environmentalists, climatologists or climate change specialists or agronomists were invited or attended. There was no attention to pollution either of the river or the water table. Its almost like they avoided all the big issues.

Therefore it was quite expensive – just getting the S Class Mercedes airlifted into Upper Egypt for the Ministers would have cost a lot and the scores of young men with bulging jackets – no, not suitcases.

Their major ‘achievement’ of the 3 day conference: “Chief among the recommendations proposed at the closing session were encouraging the media to spread water awareness among the population, expanding the use of unconventional water resources, for example, desalinated seawater and treated wastewater, and supporting water-related projects and technologies.” Rather sad. Nothing practical or significant with an objective and timeline. I thought this was a crisis time for Egyptian water – the Ethiopian dam and climate change and all they have is a media ‘encouragement’ campaign not even a media campaign.

The leaking domestic/commercial water pipe supply system didn’t get mentioned because it was perfectly constructed by Army Engineers. Failure to maintain it over 40 years just proves how perfect they were in building it.

This is very odd because every other country is giving priority not to new expensive water technology but water savings and efficiency. And those others have the tens of billions for desalination which Egypt doesn’t. The Supreme Water Excellency’s have announced $US51 billion of water projects – who will pay for it and how will this new expensive engineering deliver water poor people or factories/businesses afford? https://www.desalination.biz/news/0/Egy ... ears/8952/. The energy costs of desalination are huge.

Smart countries are also looking to improved farm technologies/plants to reduce water usage/recycle which is an issue, never mentioned by Supreme Ministers in Egypt, because farming consumes 85-90% of the water and wastes a lot of it. Israel leads the world in this and exports its answers to any buyer. (Toshka and those fools were not buyers) Other countries may have answers/technologies/plant species answers – Egypt doesn’t.
https://www.al-monitor.com/pulse/origin ... risis.html

The reform of farming – basically consolidations – and the benefits in machinery/technology/water systems and plant species has been avoided for over 70 years and Egyptian farms are a failure in feeding the country and in food exports . Its reasonably clear that they are even less productive than 3/4 decades ago and hugely less productive than farms in India, Indonesia and related places. The reform of farms of course would be socially disruptive but would get rid of the (say) 1/3rd of farmers that are not good at what they do. Driving them out could benefit the country and might lead to a purge of a few hundred thousand from the related public sector jobs to benefit the country and taxpayer.

When you read this stuff you realize that faced with its single biggest mid-term issue – water and climate change – Egypt doesn’t even get to first base. There seems to be 70 years of ignoring the bleeding obvious whilst parading through a mirror maze. In any event the Nile is foul and polluted and water purification is expensive and barely works – in many cases it doesn’t work at all. They could start with that project. The water table is similarly polluted by 70 years of these people not doing their jobs. Only fools think this pollution irrelevant because both water sources contain elements and bugs which kill you and deform kids.

According to a 2014 report by the Egyptian Centre for Economic and Social Rights, as much as 35% of all residential water leaks into the ground because of the deteriorating pipe network. Without this wastage an additional 11 million inhabitants could have fresh water. Who cares just go for a media solution to the problem. https://www.theguardian.com/world/2015/ ... s-scarcity

The putrid and unhealthy state of the Nile - and getting worse in inverse proportion to western aid - is another issue I will post on another time. Here is an Ariel 2014 photograph of a fishing boat in the Nile near Cairo. 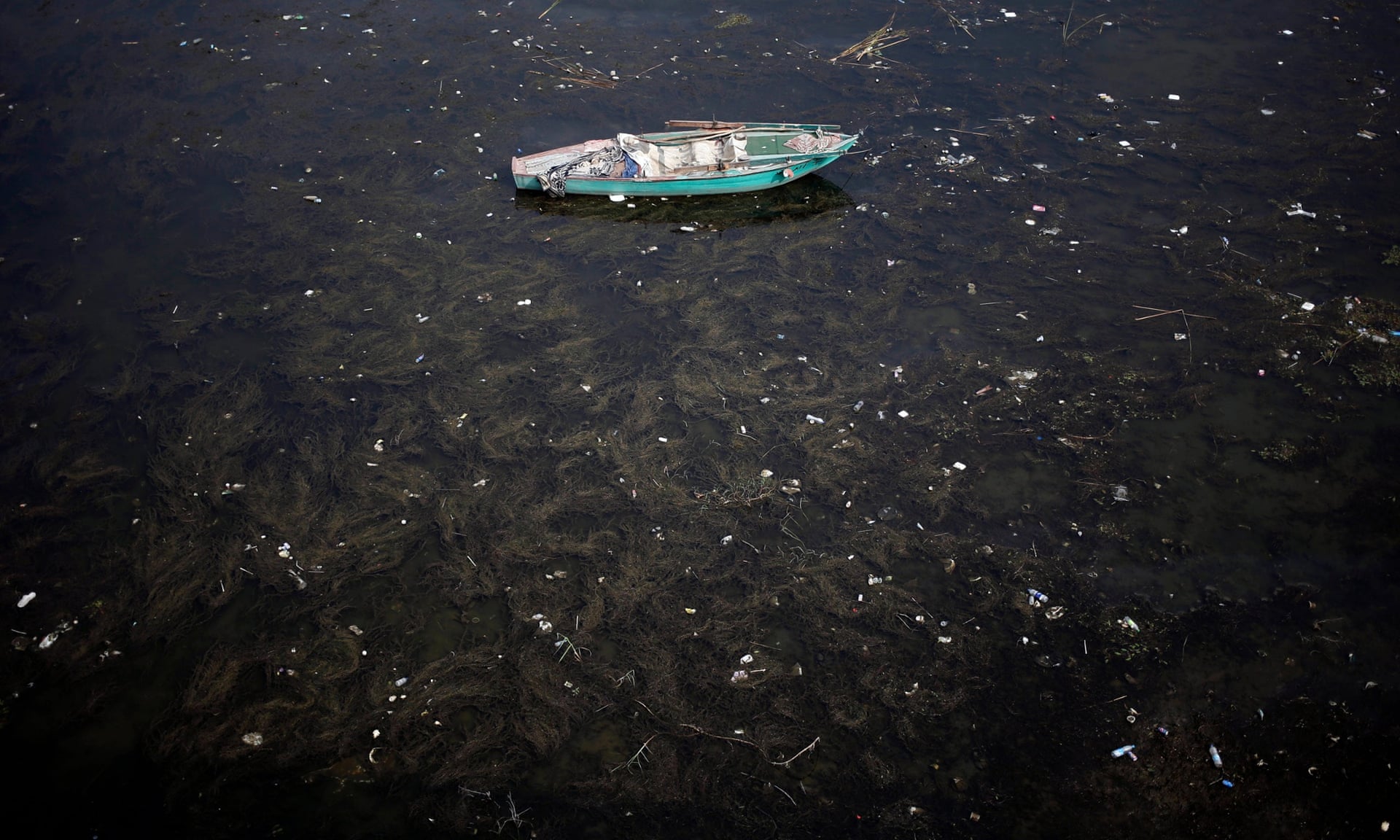