Military Competence Blows Up Or Bloats.

Military Competence Blows Up Or Bloats.

Military Competence Blows Up or Bloats.

Heliopolis Chemical near the airport blew up in a major way 7 months ago.

Oddly a military spokesman, not a company spokesman nor a fire brigade chap, said to the media said the blow up ‘had been caused by high temperatures.’ He produced no specific evidence to support his claim https://www.reuters.com/article/us-egyp ... SKBN1K23AU

Rot. It wasn’t a very hot day it was 35 degrees and the ‘blow up’ wasn’t during the temperature peak. 12 were injured.

It was once a munitions factory making grenades etc to protect the Motherland. Nowadays there are more important nation-saving things to do – the manufacture of paint under the skilled leadership of an expert in the war paint area - Major General Mammdouh Badawy.

Its owned by the military but al Ahram forgot to mention that. How it migrated from being a state military asset to being ‘owned’ by the military to do trivial money-making non-military work (without reference to the citizens) it is not clear.

Because it is a military facility any legal claims for compensation for damage this fire does to a citizen or business cannot be heard in a civilian court but only in a military court with the ‘judges’ (few if any will be lawyers) all friends of the chap whose negligence led to this disaster. In that court the citizens will have no friends, no legal representation and no right of appeal.

The secret no one dares expose is that this state within a state is unconstitutional and violates the most basic rule that everyone is under the same laws. Its illegal but no lawyer and definitely no judge will even hear this matter let alone decide against the military and in favor of the citizens.

Lifetimes ago the military used to do basic armaments manufacturing in Egypt but the US military cash cow means they now just do supermarket shopping for all their killing machines in the US/France/Russia and always buying the worst or the most simple like their version of the F15 that their pilots are barely able to fly) allowing they to convert their old factories to Pressing National Priorities – like paint, pasta and botched up Chrysler 4 wheel drives on yearly production runs of 12,000 units – crazy and unprofitable. Some say its just 6,000 units a year which is certifiably mad and a waste of national time and money. https://enterprise.press/stories/2018/0 ... er-decade/. Maybe they do just basic car assembly – a job for cretins that could be better done by robots/computers.

Meanwhile Algeria and Morocco power ahead on car manufacture – backed by billions of on the ground investment by people who aren’t generals but know how to make and sell cars and Turkey makes significant parts and does complex assembly of the most complicated killing machine in the world – the F35 which Egypt won’t be buying or if it tried won’t be allowed to buy. At $US125-150 million per plane its expensive to crash and the only way to learn to fly it is in the US and Egyptian pilots fear they may be judged there – and would.

The Norwegian paint competitor to the burnt airport military factory, Jotun, that dominates the market, says it hasn’t noticed any competition from the Major General. Its therefore probable that the paint-licking General is no more successful than his uniformed mates all of whom have never had any commercial victories – nor any military ones either. https://www.reuters.com/investigates/sp ... -military/

The major General is ‘up against’ or looking for a revolver to deal with a world leading company, active in 100 countries, painted the Eiffel Tower and very successful in Saudi and the Gulf including Burj Khalifa (a brilliant achievement for a cold climate country in climates where effective paint solutions are hard, unlikely to be duplicated, without intellectual property theft – but that theft is a world winning skill in Cairo especially in pharmaceuticals by military associated firms).

Jotun pays tax and has to pay its non-conscript staff, Military Paint Heliopolis doesn’t, so driving out private enterprise like Jotun with the new big military commercial businesses will hit tax revenues for services to the citizen. If they do it – although I’m sure that even if the military product is awful and expensive it will’ get all government contracts which will just be another way in which the taxpayer pays for the military and the state buys third rate products for a first rate price.

The position Jotun holds has been studied more broadly. The general position of most multinationals and even of firms in Egypt is that the military have a 30-50% cost advantage – no taxes, free land, no import duties, fixed government supply contracts, a court system that will always decide for them, exemption of the military from contract law, free or cheap conscript labour and this means than no sane person wants to invest in Egypt against an existing military competitor or in fear that one will emerge in the future.

In the last 3 years there has been a tidal wave of military commercial expansion – odd given all their military duties were failures at the same time. And they were on an engagement-girl style buying spree/orgy that must have meant a lot of extra military work – training, spares, training of maintenance staff, building of new storage facilities, buying of weapons systems, decommissioning and sale of old systems to fit the new machines etc. https://www.reuters.com/investigates/sp ... -military/ and https://www.reuters.com/article/us-egyp ... SKCN1IH185

The problems above, although worse in the past 3 years, have always been there and explain why many multinationals have only come into Egypt with the military as a ‘business partner’. At a minimum it means some military stooges in window-dressing senior jobs and on the Board getting $US100,000 pa for doing nothing except breaking company law and betraying business secrets to the military. It can also include military share holdings which might include free land, violence against unions and military threats to judges to get a ‘good’ result. Invariably the multinational will not allow actual management roles for Egyptians/the military because of what will happen.

Even the somnolent IMF was roused to say the private sector was being pushed out but it forgot to mention the taxpayer exploitative how of was being done. Very IMF. https://www.al-monitor.com/pulse/origin ... r-imf.html

Back to our non-ironical paint job. Here is the Supreme Military Major General Top Coat – maybe just an Under Coat , or could he be a primer – probably not – maybe a paint stripper. 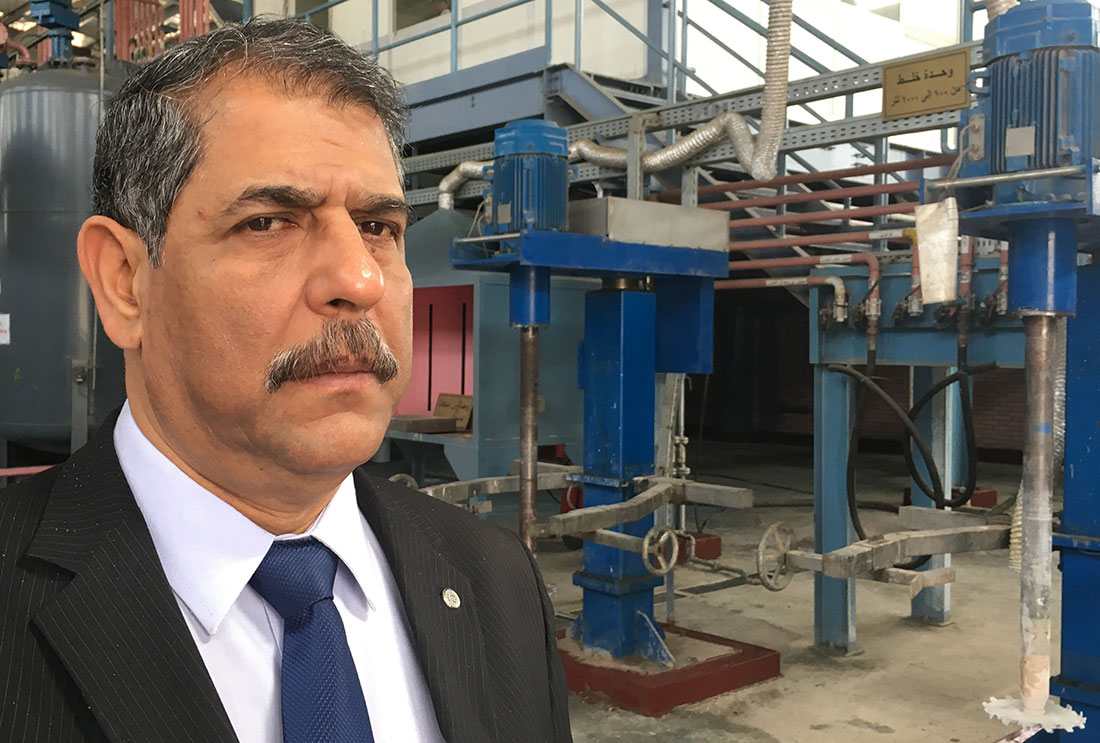 The silver pipe in the center background looks dangerously/carelessly deformed. Why you would run the 6 reddish coloured pipes right up against the stair case - lets hope they are not hot or won't explode like his factory did recently. One assumes he let Reuters photograph him against the backdrop, so to speak, of the best part of his factory. I wonder what the worst looks like. He hardly looks retirement age except for weight problems that he shares with most of the high command. If he’s not retired why is he here making this trivial product whilst Egypt is in military and economic trouble – you would need to ask him about how he sees national priorities following which you might get arrested for bringing the military into disrepute.

Under the President's new anti-bloat program (which avoids the obvious bovine treatment of a masculine, aggressive and bloody metal trochar implement - cheap, quick and brutal) the Major General should go for immediate taxpayer-funded bariatric surgery at the Cairo specialist clinics at any of the military hospitals - not available at civilian hospitals.

My suggestion to the president on the broader bloat issue is a battalion or 10 of Weight Watchers - each with 1 meter tape measures - maybe two meters. They rove around assailing citizens on the street giving them Weight Infringement Notices. A bit like those heroes of freedom the Iranian Revolutionary Guard or Mao's Red Guard - although killing a million might be going a bit too far - by Egyptian Standards, public beatings and humiliations run the risk of observation by the western media and the stopping of that Nile flow that keeps Egypt rich - the flow of western aid. Maybe it could all be done as Nasser did it in secret locations in the Western Desert. So many possibilities for this worthy initiative of the President. In one fell swoop he's picked the most important issue facing Egypt and that its a problem not of the Junta but of fat citizens who have no self control.

On the airport fire they need to fire the Military PR buffoon who did the press release on the fire and get someone better at inventing plausible fictions for their fiery mistakes. Maybe a Brotherhood or Jewish plot. Rounding up 20 Brotherhood terrorists within 1 k of the fire shouldn’t be hard – just set a number target and deliver. What is it about these PR idiots - the Chinese, Russians and other toilets can get a plausible face and mouth - why does Egypt always fail?