The water vehicle is considered the first of its kind in the Middle East and North Africa, and was launched in cooperation with Rotary Egypt. The facility is set to offer free medical services for up to 50,000 mothers and children in several cities and remote areas.

Zayed said the hospital will tour eight governorates, anchoring for one week in each. The tour will start on March 1st with Aswan, then move to Luxor, Qena, Sohag, Assiut, Minya, Beni Suef, and Giza.

During a speech she made at the inauguration event, Zayed stated that the idea of the floating hospital "aims to attract children and mothers to conduct medical examination."

The boat is fully equipped as a medical center. It features a laboratory, unit for sonar and echocardiography, as well as pharmacy to provide free-of-charge medicines. Patients who seek treatment at the facility can undergo tests to detect illnesses including breast cancer and diabetes in children.

The boat's medical staff and nurses will also be hosting regular awareness campaigns on nutrition, breastfeeding, and other important health issues.

In November of last year, Nestlé Egypt and Rotary Egypt - a branch of an international community of philanthropists - signed an agreement to launch the first floating hospital in the MENA region. Its first tour will be from March till April, with a focus on Upper Egypt governorates.

The boat shown in the above newsfeed is the MS Royal Ruby, it is shown in the original newsfeed, so I don't know if this is the one that's been converted

Sounds llike a sensible idea, if they implement it properly.

I do hope this is a success! I have so much admiration for the hospital trains etc that travel through the provinces in different countries. They do marvellous work so I hope Egypt does too.

Well one supposes that something has to be done with all those rusting cockroach infested hulks....

Is this the same organisation that brought the very impressive travelling hospital to the large bus/car park in Ramla last year? (or the year before - I lose track of time).
Top

With any luck they will teach/advise the mothers about effective birth control measures and its benefits towards all and denounce FGM.
Life is your's to do with as you wish- do not let other's try to control it for you. Count Dusak- 1345.
Top

With any luck they will teach/advise the mothers about effective birth control measures and its benefits towards all and denounce FGM.

You'll be lucky, remember it's in God's hands as to how many children they have.
Top

Well more and more families say they want to have just two children and the women are having implants.Admittedly the better off and more educated folks.
Top

Two points. Egypt knows nothing of its own history - except the bits 5,000 years ago about an infallible god Pharaoh and lots of obedient slaves. The very nice young Major in Military Security who wrote this media story is no more literate about his own country than the 450 Major Generals he serves daily.

There have been hospital steamers on the Nile and elsewhere in Egypt for 100 years and this current stunt is like all the others - a resurrected corpse, and definitely not a new idea in a country that hates new ideas. In at least WW1 steamers on the Nile were requisitioned as hospitals - probably more recuperation because those hundreds of fine doctors and nurses woyld know that a ship makes a bad hospital for any tasks that are exacting. Here is a painting of one steamer housed in the Imperial (not Sisi Imperial) Museum. I assume it was one of many.

One assumes it was a quick fix in a difficult environment and some would recall that one huge medical hospital in Cairo (again more recuperation) was a former ice skating rink. The Presidents current palace was formerly a medical hospital - again because of space problems. In some or all of these cases it was a band aid - a bit like Sisi's band aid on his gushing political, security and economic Carotid.

In addition the area around Suez was used, and for much larger medical/hospital boats, and this one, The Indiana, was seemingly owned by the Anglo-American Nile Company. This surprised me - US investment in Egypt and in an area formerly dominated by the Brits. Bits of this story don't quite add up. 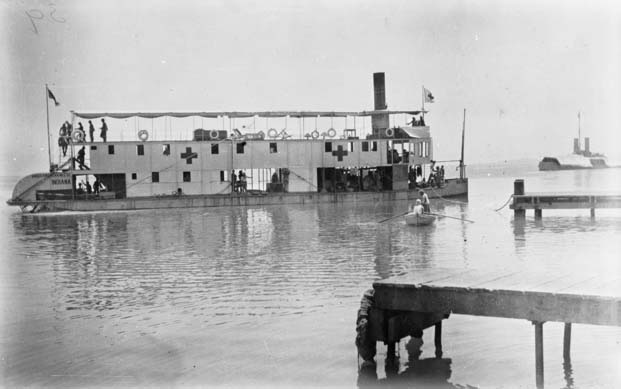 Second there must be a hundred Nile Boats rotting over the past 5 years many owned by connected people. It would be interesting to know which boat owner has benefited from this matter and the cost, it must be enormous, of running a full hospital and not just a large GP consultation clinic. XRays, sterilization equipment, operating theaters, labs to do blood and other tests would be just a beginning.

Its objective is baffling. If the hospitals are not doing their job then ramp them up. If medical resources are concentrated in Cairo, as they are for difficult cases, then either force the specialists to tour or provide funding/accommodation for people to go there.

If hard up for an idea adopt an Australian one that's worked for 80 years - small planes to remote areas to deal with a crisis followed by rapid transport to a specialist hospital. Unlike Egypt some of the best doctors and nurses in Australia que for a job in remote Australia and the professional independence/development it gives them. As we know in Egypt the upper middle class wont go 1k from their 'home' and don't like dirty demanding work.

I suspect this is a Sisi PR stunt - part of many leading up to he being given/stolen the right to be President to 2034. A proper fit out would be in the millions and upper class Cairo doctors just won't do it.

Won't this 'thing' be competing with hospitals and doctors and where in the hell are the demonstrated needs for it or clear objectives. What problem is it trying to solve - other than the need to improve Sisi's near fatal lack of public support.

The hard work requires good people to fix the broken health system, its chaotic insurance system, the proper training of doctors in non-rote-learnt medicine, a program to get many off tablets of odd provenance and ratty natural treatments, a proper system to evaluate new drugs and do a tough negotiation on national cost, major programs on diet/bad eating/junk food, proper inoculation programs (the President has promised 10 million HepC treatments due in a few months - I will not hold my breath) proper nurses, a major disciplining of doctors and pharmacists on tablets with little purpose, a clean up on the scores of marbled halled 10 bed private hospitals etc. It will never get done but silly stunts will get done every day in silly land. Someone might sort out why there is a huge parallel and modern military system all over Egypt (but nothing in Upper Egypt I think) and whether its thousands of beds are ever filled.

People are sick in Egypt but I fear most are in Heliopolis around the Presidential Palace.
Top

A good Idea lets just hope no one pulls the plug on it!!!!

You are correct Hafiz, We have a hospital in North Wales where I used to work a few years ago, and thier problem was getting decent Doctors to work there.
You see, Doctors like to work in places that have a reputation, which helps thier career as they move up the ladder.
They also like to set up home where they can see and be seen, if you catch my drift.

I dont really see a floating hospital being a magnet for these professional people in all honesty. What sort of healthcare can the patients expect ?
While thay say, "Well something is better than nothing", regarding medical care, that is not and should not ever be the case.
Top
13 posts • Page 1 of 1