Ten remarkable mummy portraits from one of the world’s greatest collections are to go on show, as part of a ground-breaking exhibition at The University of Manchester’s John Rylands Library starting (July19). 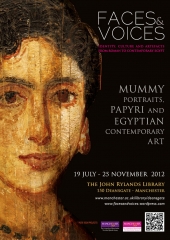 The show will also include an amazing display of Rylands Greco-Roman papyri – most of which have never been seen before in public - and a series of works by influential Egyptian artist Fathi Hassan.

Ten of the Hassan pieces have been specially commissioned and never exhibited before.

The ten mummy portrait panels and the 40 or so papyri, both from around 2000-years-ago, were mostly found in the Fayum region, south of Cairo.

Dating to the Roman Empire, the portraits and papyri provide a unique insight into how the Egyptians living under Roman rule saw themselves.

The show will run from July to November, providing a rare opportunity to see the portraits of people living in antiquity and samples of the writings they left behind at the same time.

The so-called ‘Fayum portraits’ were found covering the faces of mummies found by the archaeologist William Flinders Petrie in 1888 and 1911.

Petrie was financed by the wealthy Manchester cotton magnate Jesse Haworth, and most of the portraits came to the University’s Manchester Museum as his legacy.

The papyri came to Manchester through acquisitions made by John Rylands Library founder Enriqueta Rylands, from 1901 to her death (1908), and later continued by the Library until 1920.

They include famous pieces, such as one of the two extant Greek fragments of the apocryphal Gospel of Mary, possibly Mary of Magdala, and documents from everyday life such as a contract of marriage and census returns.

Papyrologist Dr Roberta Mazza and Professor Kate Cooper, based in Classics and Ancient History, are co-curators of the exhibition.

Dr Mazza said: “These papyri and mummy portraits provide a rare window into people’s lives at a key point in Egyptian history, when Egypt was part of a wider Mediterranean world dominated by the Roman Empire.

“But the show will have a contemporary twist thanks to the contribution of the distinguished artist Fathi Hassan, who can be seen institutions such as The British Museum, V&A Museum and The Smithsonian National Museum of African Art, Washington DC.”

Professor Cooper said: “The exciting thing about the papyri is that they show a forgotten side of history. For example, the Gospel of Mary fragment argues that women should have a leadership role in the Christian church, a view which the medieval Church tried to suppress. This third-century document is very timely in light of the current debate about women bishops in the Church of England.”

Manchester Museum Egyptology Curator Campbell Price said: “We are incredibly excited these ten portraits are part of the exhibition.

“What is particularly fascinating about them is that the people portrayed by the artists often look as if they are Greek and Roman rather than traditionally Egyptian- indicating just how much of a melting pot Egypt was 2000 years ago.

“The portraits can often be dated by their hairstyles or jewellery – showing how quickly fashions changes almost two millennia ago.

“They appear strikingly modern, and grab your attention in ways traditional Egyptian mummy masks do not. I think this is why they are so popular with the public.

“After the exhibition, they will go on display in a specially built display space in the Manchester Museum’s new Ancient Worlds galleries – opening at the end of October.

Rachel Beckett, Head of Special Collections at the John Rylands Library, said: “We are absolutely delighted to be showing items from our own fantastic papyrus collections, alongside the wonderful mummy portraits from our University partner institutions The Manchester Museum, and the remarkable contemporary artworks by Fathi Hassan.

“Bringing them together puts each object into a wider context, and offers visitors to the exhibition a unique opportunity to explore the human experience from both ancient and modern perspectives. And it looks beautiful too!”