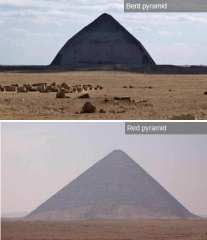 A new topographical mapping method, based on fractals, is revealing new information about ancient activity at pyramid sites in Egypt.

Some 4500 years ago King Senefru founded the 4th Dynasty and set off building a pyramid to preserve his body for the afterlife and eternity. After a failed attempt, Senefru succeeded in building the first ever complete pyramid in Dahshour area, 40 kilometres south of Cairo.

Nature subsequently erased all traces of ancient human activity in Dahshour; even archaeological excavations revealed very little of what went on at the Dahshour site during the construction of the Bent and Red pyramids.

The Bent Pyramid was Senefru’s failed attempt, and is unique in shape. It represents a transitional period when the architectural style of a tomb changed from a flat mastaba to a step pyramid and finally a complete pyramid. The Red Pyramid is a true smooth-sided pyramid.

To know human practices at the Senerfru pyramid area, a team of earth scientists from Germany examined fractals (natural or artificial created geometric patterns that form designs) at the area around the Dahshour pyramids.

According to the scientific journal Quaternary International, Ame Ramisch of the Freie Universitat Berlin and colleagues from the German Archaeological Institute in Cairo created a digital model of the topography around Dahshour and investigated the area using fractal pattern recognition analysis.

Investigations revealed that the area is filled with natural and man-made fractal areas as well as a huge non-fractal footprint around the pyramids.

Research identified that an area almost six kilometres long was modified during the Old Kingdom and no evidence of natural fractals, which suggests that the site was once a wide promenade.

“The modification is hard to spot, especially if your eyes are untrained,” says Ramisch. “Even with trained eyes, it is difficult to believe the gigantic footprint the Egyptians have left.” Ramisch told New Scientist magazine.

The disturbance to natural fractals can give a sense of what occupied the site. In this case, Ramisch continued, it was probably broad terraces several kilometres long, which would have "increased the sense of monumentality of the pyramids.”

Keith Challis of the University of Birmingham commented on the discovery in the New Scientist, describing it as “a new approach.” There is a well-established link between human activity and landscape modification, he pointed out. "This provides an interesting new way of identifying such modification."

Dahshour also houses the remains of the 12th Dynasty pyramid of King Amenemhat II as well as the pyramid complex of King Sesostris III, which includes his pyramid and a smaller one of royal woman and a gallery tomb for his daughters.