Another place I really like is the Ramesseum and for those that don't know, it was built by Ramesses II as his funerary Temple in 1304-1207 B.C. and it was dedicated to the God Ra.
Often even in busy times there are not many visitors and I love the solitude of the place. Nowadays most of the Temple is in a very bad condition and in places it is in ruins, although there does appear to be a few changes each time I visit. The entrance once had two pylons that have now collapsed and in the first courtyard only a colonnaded hall has survived. Many other later Pharaoh's such as Merneptah and Ramesses III have superimposed monuments in the Ramesseum.

In this post I have tried to include an old image from either mine or Charlie's collection, then add a more modern one of my own to juxtapose the two images of old against modern. 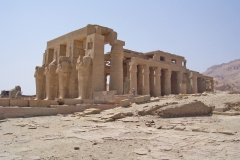 In front of the first courtyard there is a row of four Osiris Statues, note in my modern image that there is statues head on the ground and the part visible figure on the left is my dear friend and forum member JoJo who sadly no longer posts on here. Anyone who has visited the monuments several times will have noticed that some things get moved around quite a bit, the Scarab at Karnak is a good example and so is this head. Here we see it in the 1863 image it is almost buried and in the 1900 photograph just sitting on the sand, notice that the top part of the crown is missing, now look at my 2004 image and the missing parts of the 'unified' crown have been located and placed on top. When I first saw this disembodied head it only had the broken section of the 'lower' Egypt crown sitting on top, at some time later the rather incomplete 'upper' crown was added. In my 2007 image the head has been raised up off the ground on a small plinth. In front of the ruins of the first pylon there once stood a colossal statue of Ramesses II that weighed more than 1000 Tons and was around 18m high. You can still see the remains of the fallen statue today. The Greeks called it Ozymandias, probably a corruption of the Egyptian "User-Maat-Ra" This huge statue later inspired a verse by the poet Percy Bysshe Shelley which is also a favourite of mine:
"I met a traveller from an antique land who said: Two vast and trunkless legs of stone stand in the desert. Near them, on the sand, Half sunk, a shattered visage lies, whose frown, And wrinkled lip, and sneer of cold command, Tell that its sculptor well those passions read, Which yet survive, stamped on these lifeless things, The hand that mocked them, and the heart that fed, And on the pedestal these words appear: "My name is Ozymandias, King of Kings: Look upon my works, ye Mighty, and despair!" Nothing beside remains. Round the decay of that colossal wreck, boundless and bare the lone and level sands stretch far away."

Re: The Ramesseum (Old & New Images)