At home I have a nice set of prints that are copies of the David Roberts sketches of well known Egyptian sites that he produced sometime after his arrival in Egypt in 1838. They are quite large being A2 in paper size, so the ones shown here were photographed my myself some time ago for my own benefit in order that I could look at them on my PC without having to take out a large folder to view them.

) of images of Egypt and I thought it would be nice to show them on here and try and juxtapose each image with a modern one. I was hoping that I could get an image of mine that was taken from very much the same place and angle, unfortunately that was not possible, sometimes due to it not having been possible to get the same distance, height or viewpoint as the Roberts prints. However I think that most of the pictures I have chosen will be recognisable as being the same shot within reason and it is possible to compare how it was when Robert's did his paintings compared to what we see today, I hope you also enjoy looking at them.

Starting with a general view of Luxor Temple as seen from the river, most noticeable is how the river has been contained and the lack of any surrounding buildings recognisable today. Next we have the great Pylon at Luxor Temple showing quite a lot of mud brick buildings and a huge build up of debris and sand that has now been cleared. We can even see the top of the Mosque popping over the top of the pylon. 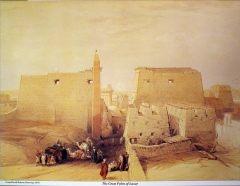 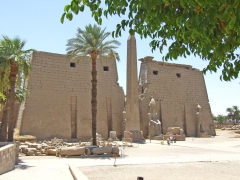 Moving South we have his painting of Edfu and the Temple of Horus, notice the amount of sand surrounding the site and also filling the courtyard and Portico inside. Also if the painting is to be believed he must have had a fairly high vantage point, something not possible today without going into the modern city. 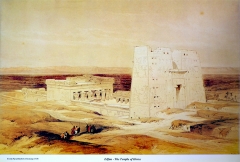 He did a further painting of this temple from the inside the temple portico looking back towards the entrance pylon. He must have been sitting on the top of the sand dune that can be seen in the first external painting. My own image is taken looking in the same direction, but outside of the portico. 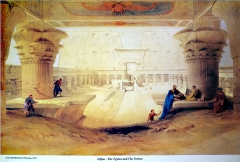 Further South again and he paints (not literally

) the Portico inside the Temple of Isis at Philae which today sits on the island of Agilkia located in the waters of the lower Aswan dam where it was relocated during the Unesco preservation work in the 1960's.
I must admit that I struggled to find an image that matched his own, mainly I think because of the absence of any colour in my own images of this temple. However I am quite certain that these two do actually represent the same location as his painting especially if you look at the roof panel of winged Vultures, but maybe someone else knows better. 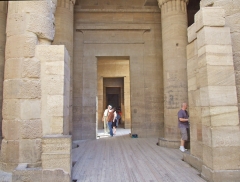 Moving on he visits the famous temple at Abu Simbel built by Ramesses the Great to define the Southern boundary of his Egypt. Although there is a huge sand dune half covering the giant statues he must have visited the interior, probably via Belzoni's excavation as he also did another painting of the inside. If people find these images interesting I will add some more later as he heads back North to do his paintings of Dendera, The Pyramids and the Sphinx.

I have always liked David Roberts Paintings and have a large 'coffee table book' of them. I don't have a coffee table though!

What a good idea to show Then and Now. It is always interesting to see how things have changed, even if hardly at all in some instances.

I belong an online group that shows old paintings of Egypt, many of which are hung in famous galleries around the world. I love looking at the different artistic styles, the different Egyptian subject matter, taking in the details, etc. So many of the scenes, although over a 100 years old could almost be today.

Thanks Hepzi, you could maybe start another thread and show us some of your Egypt related favourites

Some years ago there was a lecture at the mummification Museum many of his painting where shown to be incorrect. A little poetic license was used.
I still enjoy them though and have his book.
Top

I am not surprised Carrie, they always look a bit too colourful even for his day

Quite enjoyed the then & now too. Interesting