As I said in another thread, this palace has appeared in the MoA price list of 1st November 2018. So I went there today.

Yes, the journey was longer than predicted. The Western Desert Road has not been maintained, and is now much slower. We had to wait for a police escort into the city; a small blue car with 3 officers. But even so, the journey from Luxor West Bank, about 65 miles, took less than 2 hours each way.

The palace is not officially open, and will need a lot of work before it is a major tourist attraction. But the custodian very kindly showed me around.

There are some 20 rooms on 2 floors. They have very high ceilings, and all have balconies. They have not seen a duster or broom in a long time. The most impressive were the Prince's bathroom and sitting room, so I'll post photos of them.

Please contact me if you wish to visit, and I will make the arrangements. 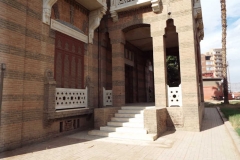 Thanks for the up-date Brian, seems an impressive place, but wondered about the furniture in these palaces. The ones I know of in Upper Egypt, obviously winter palaces, had none remaining. I am told most of the very best pieces are now in the Abdeen Palace in Cairo.

You may be aware that during the Mubarak era, the idea was that he was to live his final years at a certain hotel North of Karnack Village, past the Hilton, that was before the so called revolution, since then it was expected that he would live out his day under a sort of house arrest, in other words no public interviews, at a place in Asswan. According to form it is a sort of palace over the old British dam to the WB. It is quite hidden away, but feel certain I went there many years ago.

CAIRO - 6 September 2019: The Egyptian Ministry of Antiquities is preparing to inaugurate the palace of Prince Youssef Kamal in the city of Nagaa Hammadi in Qena Governorate (650 km south of Cairo) by the end of September.

The Ministry of Antiquities aims to transform the palace into a distinctive tourist attraction that reflects an important era in the history of Egyptian architecture and arts, highlighting the palace's masterpieces and rare collectibles.

Restoration works of the palace cost about LE 10 million and included structural consolidation of all walls, modernization of alarm systems and surveillance cameras, and the restoration of the Selamlik, Sabil, dining hall and kitchen, according to Abdel Hamid el-Hagan, governor of Qena.

“The palace of Prince Youssef Kamal is one of the most important palaces in Egypt in general, and in southern Egypt in particular, because of its wonderful location on the Nile River and its unique architectural style,” said Mohamed Hassan, director general of the Islamic Antiquities Sector in Qena.

The palace of Prince Youssef Kamalwas established in 1908, under the supervision of architect Antonio Lashiak. Lashiak is one of the most famous architects who came to Egypt at the end of the 19th century and the beginning of the 20th century.

The palace was registered as an Islamic monument in 1988 and consists of nine unique architectural units, initially built on an area of 10 acres. However, it has shrunk over the years as parts of the palace have been used as government buildings.

The palace has four ceramic façades, the main north-east facade overlooking the Nile is preceded by a double marble staircase leading to a front porch. The northwestern façade is punctuated by a series of marble balconies.

The building consists of two floors and a basement. One of the most beautiful findings in the palace is a wooden elevators made by the prince for his mother who was suffering from cardiac diseases.

Prince Youssef Kamal, founder of the School of Fine Arts in 1905 and the Society of Fine Arts Lovers in 1924, built three palaces in Cairo, Alexandria and Nagaa Hammadi blending the European style with Eastern architecture.

The price contributed in the development of a large number of villages in Upper Egypt, and introduced some modern agricultural techniques in Nagaa Hammadi. After the July 1952 revolution, the prince left Egypt and stayed in Europe until he died in the city of Astrobel, Austria in 1969.

It is noteworthy that the Egyptian Ministry of Antiquities has recently received one of the palace buildings for restoration after it has been rented by a citizen for LE 1 since the sixties of the last century.

The Agrarian Reform Building also handed over 500 masterpieces that were in its premises after the restoration began.

The city of Nag Hammadi, which hosts the palace, is one of the most famous and largest cities of Qena Governorate and southern Egypt, due to the existence of a large complex for the manufacture of aluminum and a sugar factory, as well as the 100-year-old El Qanater el Khayreya.

Experience the magic of Egypt where it all begins
(y)facebook.com/friendsofegyptsupporttourismtoegypt
Top

The Ministry of Antiquities manage to ignore that the Nag area is the location of world significant early Christian gospels/letters/epistles. They are regarded as the greatest discoveries in recent lifetimes on religious matters and second only to the Dead Sea Scrolls. Best to keep any Christian stories under the sand. The MOA also manage to mispell Lasciac the Italian/Slovene architect who designed much in Egypt in the 19th century: https://en.wikipedia.org/wiki/Antonio_Lasciac.

All good buildings in Egypt were designed by foreigners and all locals design the awful.

Most but not all of his buildings were in the Italianate style but the one at Nag is more traditional. His major piece in Cairo was the Taha Palace. https://web.archive.org/web/20080704070 ... 6-10.shtml. The execrable Farah Diba stayed there after she was kicked out of Iran. Apparently the contents were pillaged and the interior left to moulder. 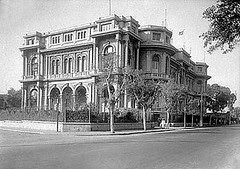 In the typical fashion of Egypt and of the Ministry of Destroyed Antiquities its apparently now a tip inside but presents an elegant profile to an ignorant world.

An external view of the Nag palace - a mixture of western and eastern styles: Its to be inaugurated in 3 days https://www.egypttoday.com/Article/4/74 ... nd-of-Sept so que up on 30 September because the Ministry of Miscreants is bound to meet their deadline - in 5 years time.

Here is a description:

"There are three palaces. The first was the main palace, he lived in, and it turned in to some kind of financial authority (?) following the ministry of finance. The second palace is the “Haramlek” for ladies; he built it for his mother and his princesses sisters. That palace is famous for the wooden Oriental evaluator (I think a lift) he requested to be made specifically for his mother who was suffering from a heart disease. It is a two floors building. The third Palace is the “Salamlek” which he used for meeting and for guests. There were other buildings in the complex that used for kitchen, laundry...Etc. It is on the Nile by the way."

The Prince was a creative, intelligent and compassionate man who travelled widely to remote areas, wrote books and funded the development of art schools and charities in Egypt. After the revolution of 1952 he Pince Youssef Kamal and the Dowla Pasha gave the government all his possessions outside the country for his belief that it was good and noble for this nation. Source the excellet Egyptian Chronicles https://egyptianchronicles.blogspot.com ... lover.html
Top

I don’t know what condition the Tahra Palace is currently in, or whether it’s open to the public, but it’s an impressive edifice as this recent article (with some pictures) shows :

Newcastle as I best understand it its a guest palace with no guests. Obama didn't stay there and there are various rumors that its pillaged/run down inside which fits with my view of the Junta - the exteriors all look OK but the reality is something different. Think also of the hotels on the coast with 'fine' swimming pools but where a viewing of the kitchens would have you on the next flight.

Back to the palace - all cost and no use - as ever in Egypt.
Top

Glad to see that progress has been made on the palace. The convoys to Abydos used to pass it.
Top

Newcastle, thanks for the footnote I checked it. At least one of the external photographs is part of an often used visual library and has been around for years - the yellow photo. If so, and given what we know of lazy journalists who just take the package of words and images from the government (military) (housed in the Farag Memorial Charnelhouse) Public Relations, then its just a morale piece and the interior photos may be old also and should not be believed.

When all the money and power moves to the new capital - along with the embassies who are being pressured to move - what attention or care will old Cairo get or will it just be pillage and chaos.
Top
8 posts • Page 1 of 1