It’s a great photograph with an Egyptian context taken in the Red Sea that tells a lot about at least three people and shows the style and friendliness that Roosevelt was famous for. Its his first and only meeting with Ibd Saud. Roosevelt was returning from Yalta, (February 1945) a far from well man but having done the deal with Stalin, exasperated Churchill by excluding him from most. Just to get to Yalta took a seven hour rough ride – one way – for Roosevelt after he left his plane.

Looking after him was something he made light of but at Yalta people who knew him were shocked by his appearance. He may have been sick but he outwitted Churchill and appeased Stalin in a conference the style of which is not like today – direct dealings, personal extended conversations, humor, unscripted speeches etc.

The kneeling translator was Professor/Colonel William Eddy. A serving soldier in both wars, and a Marine Colonel in the second. He taught at some of the greatest universities in the world and was president of some. At a time, long ago, when the American University in Cairo amounted for something, he taught there – nowadays most of their teachers have awful degrees from awful universities and visiting scholars are invariably 4th rate. Eddy's specialty at the great Dartmouth College was teaching literature.

Eddy was an intellectual, a spy who established the CIA, a diplomat, born in Lebanon of Christian missionary parents, fluent in Arabic, came from humble circumstances and got a Princeton scholarship, multiple war decorations, found life in Cairo unpleasant, was driver and initiator of the US-Saudi policy, a teacher of students and a killer in the field known for his bravery. Remarkable for his breadth and for high achievement in all areas Ibn Saud liked and trusted him and asked that he be his translator.

Like all good advisors he spoke truth to power and even in the 40’s stated that strong US support for Israel would fuel Islamic fundamentalism.

Like FDR himself his mental and moral qualities and selfless public service is not often seen in the modern world.

His boss FDR was not well from heart disease and suffered a deal. Over the longer period FDR had contracted polio in 1920 as his early career was peaking. Most would not emotionally recover from this, but he flourished.

An aside but important - not as an example of censorship nor of the need for Americans to feel good about themselves but the near universal regard the media had for FDR and their firm view that his poor and disabled health didn’t matter a jot. What I mean is that no/very few still or movie photos exists of Roosevelt in a wheelchair, using crutches or being cradled by soldiers (and usually his son) from one chair to another. For public speeches one trick was to build a ramp his car could mount and he would then give the speech from the read seat of the car. Lots of other tricks were used by his staff including a fabricated five or six step walk as he held, vice-like, to a soldier or his son’s arm. He often fell down but the media co-operated and all were amazed at his even temper, wit, charm and contagious optimism.

As a result of the media by the time of his death after 13 years as President very few Americans knew he was disabled from Polio. The ones that knew didn’t care. Its difficult to interpret all this and cynics would say that Americans were so desperate in the Depression and WW2 they imagined a perfect man from a broken body. Who knows or cares FDR was a political genius.

He didn’t stay away from Polio, lie about it or deceive people. For example from 1934 (the first year of his presidency and with The Depression still active) the March of Dimes charity raised money for a Polio cure and FDR was its leader and that funding led directly and later to Jewish Jonas Salk and his vaccine. On this matter leaders in the Middle East are consistent and observant Muslims, how could they be otherwise, should therefore burn all polio treatment, let their children die and maintain their orthodoxy – because their great religion will permit no contact with Jewish things. The same policy should also be applied to most of modern Jewish medicine following which the Arab and Muslim peoples will be exterminated in compliance with their religion. Start with avoiding the Hepatitis C treatment on the road to oblivion.

Paradoxically Ibn Saud was also crippled at this time and later by arthritis in legs, arms and back.

The US battleship USS Quincey was set up in the Great Bitter Lakes of the Suez Canal and simple modern furniture, a tribal rug and clearly a mood of relaxation. No throne room in Buckingham Palace but I think it did the business, As a result of this meeting Saudi left the UK camp joined the US camp and has stayed there since whilst its neighbors fluttered from one camp to another.

Most of the chairs were wicker/cane – a deal more tasteful than Sisi’s presidential gilded French reproduction furniture so badly designed and made you would be flat out getting a bid or two for it at a provincial auction house. 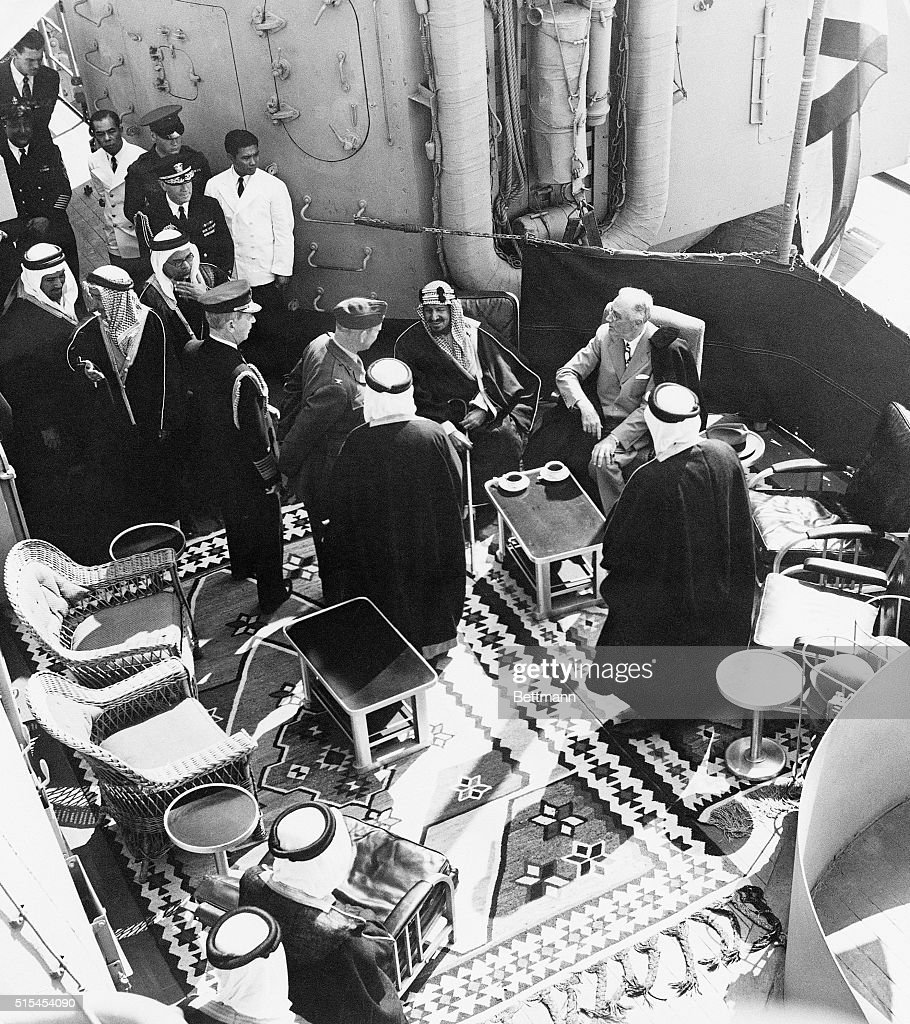 Ibn Saud liked the food on board so much he wanted the ship’s chief on his staff – not an attraction that was reciprocated. Roosevelt instead gave him a DC3 and the king had never flown.

At this stage Saudi’s resources were not well known nor even explored. The big oil producing areas besides the US at this time were Burma, Iraq (an Australian initiative by Morgan the founder of BP), Indonesia and the Caspian Sea (where Hitler had been headed). Therefore the meeting wasn’t the greedy rapacious Yanks many fools would give it.

Here is something unexpected and so visionary it puts our current crop of leaders in the shade or better still for all of us, underground:

“Roosevelt had hoped to enlist Abdulaziz in a cooperative effort to develop the entire Middle East. It would be, he doubtless thought, not unlike his own famed Tennessee Valley Authority (TVA) at home. He held out his hopes for re-forestation of the arid deserts. Water projects, too.

All this great hope might be theirs if the Arabs were more welcoming to the Jews’ settling in Palestine, Roosevelt told the King.

But the King brought him up short. Arabs, he said, would rather die than give way to the Jews. And they’d rather live in poverty than share prosperity with the Jews.

Roosevelt knew that Arab immigration into Palestine “had vastly exceeded the total Jewish immigration during the period [since 1921].” (Very unexpected, written by a diplomacy expert and worth further investigation) https://providencemag.com/2015/12/fdrs- ... 45-part-2/

Death wasn’t far away but look at this photo –

FDR also met someone else. Neither seem very interested in the other. One might be dying but the other was already dead but unburied. FDR’s attention to him was cursory. It was the foolish and decadent Farouk who began an 80 year competition for Egypt in who cou;d be the worst ruler of a people too silly to 'deal with' the worst.

Haile Salise and Churchill were also ‘dealt with’ on board. FDR had also been in Cairo in ’43 for the so-called, not very interesting and unsuccessful Cairo Conference with China and other alms seekers on the way to Tehran. FDR didn’t want France back in Indochina - a policy reversed by Truman. A second Cairo conference involved Turkey as part of a half mad Churchill plan to get them in the war (his crazed soft underbelly strategy as al alternative to invasion of France which he had always tried to avoid/delay) and which Churchill had previously met secretly with the Turkish President in some village in Eastern Bulgaria. Along with all his unhinged/impulsive/not-thought-out Balkans/Greek plans in WW1 and WW2 they either never got off the ground or ended in bloody disaster. However by this late stage in WW2 FDR and Eisenhower were running things, ignoring what Churchill wanted and his heavy drinking and mood swings.

Relations were also strained by the fact that FDR knew that UK policy had led to the starvation of 1.5-3.0 million Indians in 1943, that India was the second largest contributor to the UK in men and material (after the US) and with 2.6 million Indian troops – more than the UK’s

The pre-eminent and frank UK war historian Max Hastings puts it rather well:

"To put the matter brutally, millions of Indians were allowed to starve so that available shipping—including vessels normally based in India—could be used to further British purposes elsewhere. When Churchill's nation was engaged in a desperate struggle, perhaps this reflected strategic logic. But it made nonsense of his post-war claims about upholding the interests of the Indian people, and indeed of the whole paternalistic ethic by which the empire sought to justify itself."

These Indian starvation deaths were 7-14 times total UK military deaths in WW2 and at a time when the Pacific and European crisis had peaked was and the probability of an allied victory becoming clearer.

Churchill had signed the US inspired Atlantic Charter in 1941 to give freedom to all colonies – at a time when he needed lots of US money and guns – but was very Egyptian in having no intention of fulfilling the anti-imperialist commitment – but took all the goodies nonetheless. https://janoed.com/president-franklin-r ... as-future/ Because US opinion was anti-British on the India matter the UK government ran a propaganda campaign to change US opinion to oppose their elected President and American interests and in favor of British interests - a sort of Wikileaks approach. IIWWChurchillRooseveltandIndiaPropagandaDuringWorldWarII(1).pdf

The Hollywood/BBC/Churchill Archive/Martin Gilbert view about the US-UK relationship lacks a basis in fact – not that any of these creatures bothered much about facts over hero worship. The truth is that UK policy in Palestine, India and other parts of the Empire were strongly opposed by the US and FDR just as FDR had ‘get out’ views on the French and their rackety empire.

FDR would have been aware that his distant relative Theodore had travelled extensively in Egypt after his Presidency and, in particular, took detailed written observations of the birds of Upper Egypt and showed an awesome interest in natural and human life. Theodore’s speech in Cairo in the ‘10’s to a seething mass of nationalists was probably in FDR’s mind because they took it very badly. He told them that their naive view of paradise following riddance of the colonial power was nonsense. This is what he said:

"The training of a nation to fit itself successfully to fulfill the duties of self-government is a matter, not of a decade or two, but of generations." https://www.atlanticcouncil.org/blogs/n ... -roosevelt

Then and now the political class of Egypt think in magical terms rather than as reasonable and thoughtful people would. Another truth rejected for fantasy just as Cairo swallowed whole the Obama ‘great speech’ promising change without effort or mistake - particularly without effort.