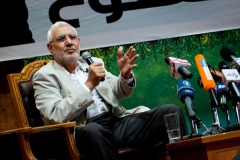 The Egyptian Ambassador to the US, Sameh Shokry, announced that Abouel Fotouh leads the race in the US with 882 votes, followed by Moussa with 664 votes, and Sabbahi with 661 votes. Shafiq received 454 votes, Morsy received 300 votes, and Ali and Awa garnered 49 votes each. Hesham al-Batawisi received four votes followed by Abul Ezz al-Hariry with two.

Egyptian Embassy in Khartoum added that voter turnout was less than 50 percent as 1,339 voters registered for the elections but only 611 participated. One ballot out of 611 was invalid, a statement from the embassy said.

Shame it's not a real race, that would sort them out. The Pharaoh had to do it, round Luxor Temple or they killed him, fit for office means 'fit for office sah?.....

'out of the mouths of mediaeval baebes and sucklings'...... my nannies...
"The Salvation of Mankind lies in making everything the responsibility of All"
Sophocles.
Top
2 posts • Page 1 of 1