The Cairo papers are screaming the Bright Star as large war games. Not really.

They happen each year between Egypt and the US, they are small, much larger exercises are regularly held with many others including others in the region who don’t do exercises with Egypt.

Its another Cairo story to make the locals feel self important – which they are - but only in their own eyes and only providing all the internet is blocked and newspapers and TV stations are owned by Military Intelligence.

The US says it included 800 troops and navy sailors. https://eg.usembassy.gov/u-s-joint-mili ... operation/. It implied it was to train the Egyptians to deal with insurgents – good luck because all previous attempts have failed.

The Cairo press forgot to mention that the Saudi’s and the UAE participated – thus ‘ruining’ the exclusive feel that Egyptians might have had. https://english.alarabiya.net/en/News/g ... cises.html

They also didn’t run this photo of the opening ceremony because it breaches Koranic law and as the female Theology Professor at al Azhar supports the rape of Christian females by Egyptian troops. There are three US women soldiers in this photo so the Egyptian officer corps should ‘get to it’ in authentically Egyptian/Koranic fashion. 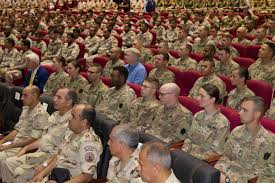 Lets hope the armed American female officers were given a troop of Egyptians to ‘deploy’ on a 22k no return run. Maybe gay US officers did some of the training.

Maybe US General Richardson was there to show them how its done:

Some reports say Jordan were there – no friend to Egypt. Maybe Princess Aisha of Jordan was there with her front line female troops. Her brother the King is very proud of her. If she was there she would be bored because she was superbly educated in the US in diplomacy and military matters at one of the best universities in the world and doesn't parade around in braid and other things to make herself self-important. 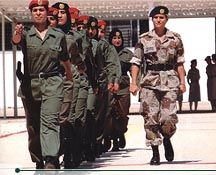 The UAE may also have been there and their female officers would welcome the opportunity to command an Egyptian company.

India (2.5 million person army) could teach Egypt a lesson or two and their Minister for Defense is said to be as tough as old boots – and very good at killing Muslims – insurgents. Unlike Egypt where a General must be Minister of Defense in India its always a civilian and in this case a person who protects the nation not the the commercial interests of the Armed Forces. Unlike her Egyptian Immortal Supreme pygmies she has a button to an atomic bomb.

Here is part of the Delhi anti-terror team whose job is to protect the Cabinet and Government of India. Much to teach Egypt.

Part or all of the Egyptian exercises are being held at the very new Mohammad Naguib Base near Marsa Matrouth (Naguib was the first head of government after the 1952 coup, got rid of by Nasser for no obvious reason, locked up in his house for 20-30 years without any family contact, went half mad and is now regarded as a honest man whose charisma, stability and intelligence were a threat to the unstable Nasser).

Here is the military Naguib Military base 'Head Office' at which these Egypt defense activities occurred – very odd. It looks more like a tart office building in one of the outer suburbs of Cairo. I wonder how its structure would deal with missile attack. The stairs at the front would give all the decrepit members of SCARF heart attacks. Take a close look at their mad design. If that’s the best the Army Engineers can do in planning for their own convenience and function expect the next war to go the same way as all the others.

Here are the massed tanks at the camp. Leaving them out in the heat and sandstorms is sure to be a good thing.

Their immense tank ‘army’ is famous throughout the world – usually in bar laughter – for the fact that many/most are broken down and left unrepaired for years. Its similar with the planes. Waste is a national strength – in some quarters.

This base includes 1,155 ‘vital’ facilities, 72 training areas, a major conference hall. Amazing. Apparently in part its there to protect the reactor. They also say its to protect the oil fields but they are 300ks away in the sea or the others a couple of hundred k’s away in the delta. That claim makes no sense because Zohr can only be defended by the Navy and they are based in Alex and maybe, recently, in Safaga. This base on the other hand has no port and an unclear airport so god knows what interoperability there will be with the Navy and Airforce to protect these national 'assets'.

They are also showing off their Russian garbage – such western allies as they are – together with their purchases from France, Cezchlovakia, Romania, Germany, China and maybe even their North Korean blood soaked trash friends who built the Cairo Military Museum for them – probably with slave labor. Interoperability must be a nightmare as would be spares and training staff to do maintenance and repairs – even for a smart army and this isn’t that. 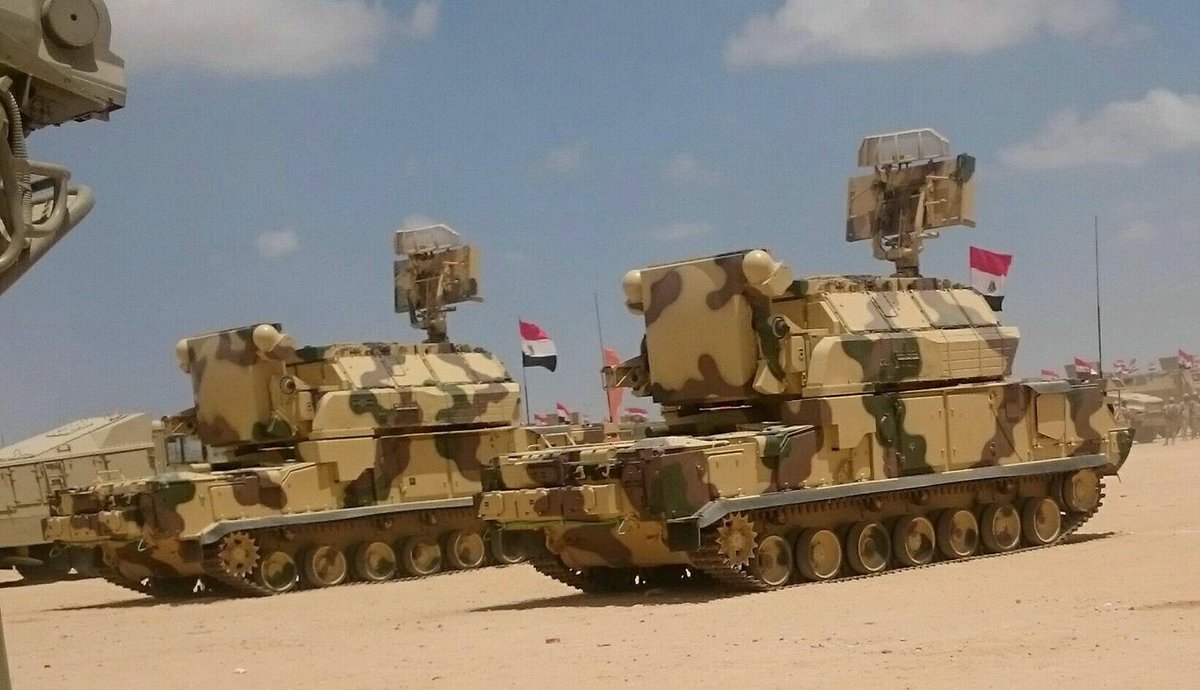 At the opening they showed off their elite special forces The Thunderbolts and Saka - here they are.

Lets ignore the painted faces and bodies but their theatricality fits with their public reputation over 50 years in the media. An image far from reality.

As with anything that involves work in the Army these special forces are conscripts and why you would have an elite group not based on professional soldiers is easy to answer – their job is risky and involves work that no middle class professional soldier in a nice publically funded Heliopolis flat/house and with an Army club/Olympic swimming pool would tolerate. Imagine the social inconvenience of several years training in huts in remote places.

A careful and balanced analysis of their competence is in an interesting and detailed blog on the Egyptian (Un)Armed Forces. https://egyptdefreview.wordpress.com/20 ... roduction/ He makes the point that the Egyptian NCO’s are a weak point. They are hugely inexperienced and the officer corps excludes them in typical fashion – people of poor family. The rest is beyond belief. Having trained these elite troops they are then use for guard/road guard duty. They are not much good.

Here is a recent Egyptian Army promotional video of these elite forces. It’s a joke. They can’t even march. Their living, working and training conditions/facilities look dubious yet this is a promotional video showing the best. What do you think the worst is like?

A number of the members of the special forces in the video are grossly overweight.

Apparently the special forces were sent to Sinai without training in counter insurgence which might explain years of failure. They use old Kalashnikov’s. A deal of their training is more macho/show off than task related and their avoidance of long distance running is a disease shared with the rest of Egypt. My guess is that none can swim. – maybe a bizarre version of very slow breast stroke and a worse version of freestyle where they keep their head out of the water.

If these chaps aren’t superb swimmers they aren’t special forces and can’t protect the off shore gas rigs.

The general criticism of the Egyptian Armed Forces is also applied to them but with worse effects. Lack of initiative, poor training, bad officers, tensions between the ranks, poor pay for junior soldiers, bad equipment, aversion to risk, unfit, difficulty facing unpleasant facts, poor medical support in battle, lack of delegation, group think, inflexible approaches to changing situations, poor intra unit cohesion, poor inter service co-operation and it goes on for ever and is never fixed.

The US Qatar base has thousands including nuclear loaded B 52’s for destroying Russia – or Iran. The US 5th Fleet is in Bahrain – one of the most powerful forces in the world. Kuwait has between 50-80,000 US ground troops in 10 bases – now probably reduced to 15,000. Egypt has no US military bases and a 5th fleet visit to the Alex would probably get grounded in its undredged Harbor. I wonder why the others are happy to have guests.

Another exercise. The RIMPAC army, navy, airforce and marines exercises in the Pacific involve a bit less than 100,000 troops and 22 countries and most valued training exercises are of a similar size to prepare for the inevitable – complex multinational deployments in which Egypt will not be an invited party just as it was not asked to Afghanistan, Iraq 2 and 3 nor Bosnia. The Egyptian participation in Yemen, shouted by Sisi, probably amounted to what it usually does - little or nothing practical. After 2 years during which Sisi said tens of thousands were committed there are no reports of deaths or injuries or of any Egyptian general having any authority in it.

The US-Israeli military exercises are at least 6 times larger. The US, Japan and India exercises, Malabar include 2 carriers, multiple major ships and subs, Say 20,000 sailors and it lasts for weeks. Another Talisman Sabre occurs every two years is multi-service, takes over a month and is performed at 6 locations from Australian jungle, beach landings to Norfolk Virginia to develop skills for different situations. Numbers a bit less than 40,000.

The multi nation, multi-service and multi-location exercises are the future because all military actions will require lots of different countries working in deep collaboration. Such an approach is anathema to Egyptian military thinking. When did Egypt ever collaborate with anyone?

Bright Star isn’t even listed in standard US military exercises. https://en.wikipedia.org/wiki/Category: ... ted_States. The US Cairo Embassy website and the Central Command for US forces in the region give it very brief notice. It is nothing.

Egypt needs to wake up to the facts. Its no longer important, it’s a bit of a liability, few countries like it or trust it and many are sick of it or tired by its games.