The media love bad news – its sells – our monkey brains like conflict and blood and are bored with the slow, complex and worthwhile - but there is at least one piece of good news about Gaza.

Its Qatar news so Egypt won’t be publishing anything about those evil Brotherhood/Qatari types in the state organs.

The Qatari’s have built a large apartment complex – some of it a bit Stalinesque other parts better designed than you might think. 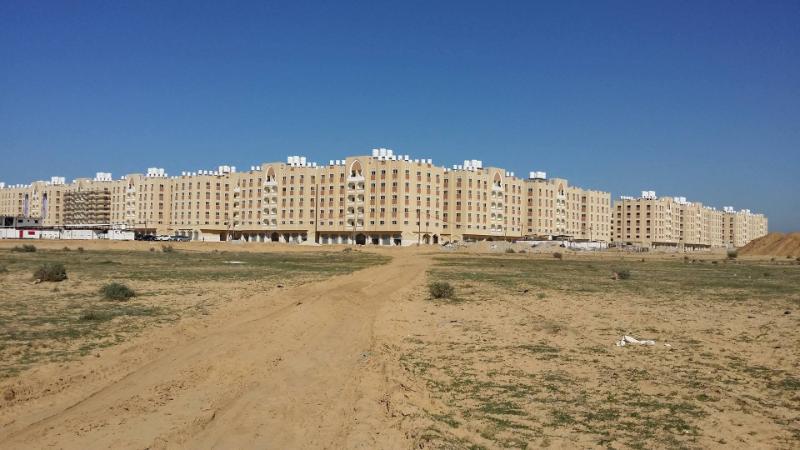 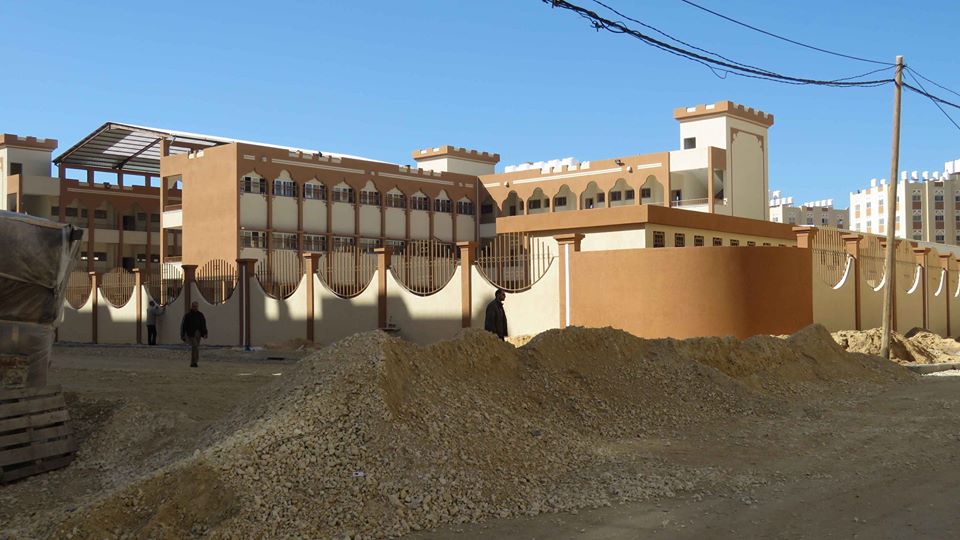 As far as I can tell there are communal/garden areas but unlike Egypt these are central areas that apartments overlook in a square like structure. In Egypt they are often external surrounds abutting a street. Unlike Egypt these may not end up looking like bomb sites and the residents may feel some ownership/responsibility. (when will an architect in the region come up with the idea of communal vegetable/fruit gardens defended by baseball bat armed grandmothers from the hoons or thugs and the litterers. I’d back those grandmothers against the Army of Egypt anyday.)

They are also doing something Egypt would never do – renovating/repairing damaged houses for poor people when the ‘obvious’ thing to do would be to get 10 military bulldozers in and start again on free donated money toi build something big and grand that no one ever asked for. https://www.gulf-times.com/story/596745 ... ief-projec

Its interesting that combined with their welfare funding the Qatari money seems overwhelmingly to go to the less well of. In broad terms this is similar to the programs within Qatar itself with a strong focus on education allowances – although a lot depends on how well its administered. https://www.gulf-times.com/story/390410 ... re-GCC-s-h

Public buildings include this which to me is quite well designed whilst fitting in the 5 stories needed in such a crowded area.

The Qatari’s have also built a hospital for, surprisingly, the rehabilitation of people with disabilities. A few dozen of these are needed in Egypt.

Egypt's aid program, excluding bullets, is close to zero and always was. Over 5-7 decades its funding to the UN program for the Palestinians is so small I can't find it whilst its the west who have funded a problem created by the people and countries in the region. As always they want someone to fix their problems - although in this case Qatar seems to be doing things with very specific benefits for ordinary people rather than funding some grand facility that would look good in the media. If so that suggests a more careful thinking about the beneficiaries rather than just thinking about the image of the donor.

Of course about 100,000 houses have been destroyed in Gaza in the past few years so this is small beer. Its also the case that building skills are poor, the Hamas administration shockingly corrupt and, at least until recently, the bulk of building material let in from Israel was diverted to ‘digging tunnels’ both into Israel and Egypt.

Its also not clear whether the apartments are a commercial investment or a gift. I think a gift which is in stark contrast to Egypt which gives nothing to anyone and for all its Muslim rhetoric doesn’t observe the Third Pillar of Islam – Charity – except charity for itself.

The Jerusalem Post on how twisted this larger story is. https://www.jpost.com/Middle-East/How-m ... aza-517787. The Post says that satellite photos indicate that the general layout is similar to middle/lower middle class residential areas in Israel and is well designed on modern lines – unlike another place of random planning/bulldozing I can think of.

Even though Egypt has been the most strident anti-Qatar voice in the region over the past 18 months (probably because of the Brotherhood links and the fact that there was low Qatari investment in Egypt) Egypt and Qatar are, according to the Jewish press, trying to do a deal in Gaza. Al Ahram says this is a putrid lie but I think we all know who is putrid. https://www.haaretz.com/israel-news/.pr ... -1.6097400

This post is going in a direction I’d not intended and could sound like an uncritical view of Qatar – far from my real position. Two further things that confuse the standard view on Qatar. First it’s a big donor to UN programs and second the best universities in the world – Georgetown, Cornell, Texas A & M, Northwestern (ranked 20th in the world) Carnegie Mellon (ranked 24th in the world) HEC-Paris (one of the top management schools in the world), University College London (ranked variously 10th to 20th in the world) etc are spending huge money in establishing campuses in Qatar. The architecture is spectacular and modern (no Egyptian architects and an international competition) unlike the deplorable British University in Cairo – and with hugely higher standards. The objective, unlike Egypt, is to attract international students to Qatar. https://www.thenational.ae/uae/in-qatar ... s-1.537773 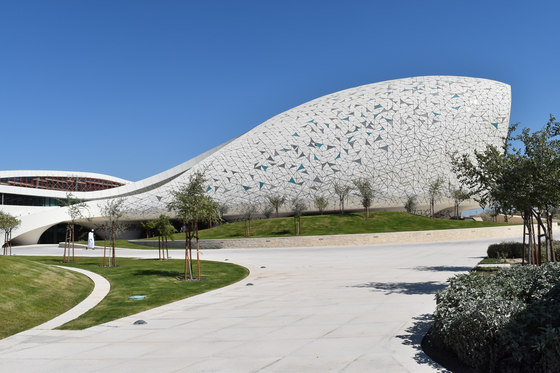 In Northwestern University interiors are elegant and modern and keep some of the heat out without destroying the world with air conditioning.


Here is the exterior, radical and a bit hard to swallow but it does let in light without too much heat – Legoretta architects.

For all the ranting, especially from the Egyptian Foreign Minister Shoukry, there is not a shred of evidence/very little evidence of Qatar being an Iranian stooge so one wonders what the screaming match has really been about. My recollection is that it came out of the blue, was done by the Saudi Crown Prince with little advice and from what we know of him he is a bit of an ego maniac who won’t change/or be seen to change his mind and will never admit a mistake - characteristics he shares with all other ‘leaders’ in the region with the possible exception of fragile little Jordan.

The US has one of its largest bases in the world in Qatar and no base in any other country in the region. Its not moving whatever Saudi says. That base has been used to bomb ISIS in Iraq and Syria, has involved planes from many other countries including Australia and the UK, but there was absolutely no contribution in this matter from Egypt – thank god. That Egypt made no contribution to destroying ISIS is odd beyond logic because ISIS related creatures were/have been terrorists in Sinai and the Western Desert. ISIS were a threat to Egypt but Egypt could not be bothered to destroy the hive and left its own work to be done by decedent, perverted westerners at their own cost.

Don’t misunderstand me there maybe a need to be suspicious about Qatar but judged against the deplorable others in the region it seems to do a few things right – whilst others do little or nothing right.

Here is an analysis of the general issue of Qatar and terrorism, cloudy not good, which includes one bizarre anecdote. One of the terrorists on the list was in a Doha triathlon – presumably spandex bike shorts and speedos. He finished second but local standards are low. Its so unlikely no one could have made it up so maybe its true. The Gulf is an asylum. http://www.washdiplomat.com/PouchArticl ... cle&id=690

I heard that most of the apartments were given to Hamas fighters (despite their own homes being untouched) and other designated "martyrs" of the continuing, Qatar-fuelled, futile resistance.
Top

Newcastle. Thanks. If true not unexpected. One looks for positive stories, even if its against my nature, and hopes that something that looks good is good but as you know of the region if it looks good it probably isn't.

Nevertheless the other point I tried to make is that, as regards the Qatari homeland, westerners more cynical than me have swallowed a pill that tells them Qatar is serious about high quality freedom of speech tertiary education - and it wouldn't be low fee education. So on the one hand Qatar may do nefarious Iran/Brotherhood types of things yet on the other it presents an enlightened image. Are they just very good at dissembling PR? Meanwhile the US maintains its immense base - the one most likely to be doing the planning and execution, so to speak, of any attack on Iran and on the Iranian puppets in Yemen - allegedly the ally of Qatar.
Top
4 posts • Page 1 of 1