A Chinese tourist damaged a 3,000-year-old site in Luxor and publicly shared the image on Chinese social media, which has since gone viral.

The tourist carved “Ding Jinhao was here,” while visiting Luxor in Egypt. Chinese social media and newspapers were quick to condemn and identify the offender, and the incident has attracted widespread criticism in China with headlines such as “China’s Tourist Shame.” The vandalist has reportedly been identified by Chinese internet users as a 15-year-old middle-school student from Nanjing. 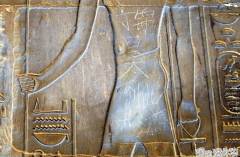 According to Chinese bloggers, several tourists attempted to remove the markings themselves, resulting in the white smudge that appears in the photograph above.

It is not yet clear whether the markings can be removed in order to safely restore the temple wall to its original state.

The incident highlights the lack of security and enforcement of rules that are meant to protect and preserve Egypt’s historic sites.

The Karnak and Luxor Temples as well as the Valley of the Kings are very popular with tourists, but concerns over safety have led to a sharp decline in tourists in recent months.

What an idiot, who flies to Egypt for anything other than culture or historical interest and then does that?

When I was in Luxor last winter the lack of Guardians at the temple sites was noticeable. At Karnak many areas usually closed to visitors were completely unattended, and just left open. A friend and I, wandering round the area to the north of Khonsu Temple, strayed inadvertently into an area neither of us had ever seen before - when we finally found our way back into the main precinct through a barred gate, the Guardian told us we should not have been in there!

Sadly, I'm not surprised by this vandalism and I expect there is a lot more, maybe undiscovered as yet.
Top

What is even a bigger laugh is that on news yesterday Chinese authorities issued a decree that any Chinese tourist should refrain from shouting in public, talking loud while using their mobile phone and spitting in public places as it gives a bad impression in relation to their country. They probably wouldn't like to stair up to much dust over the incident as they need the Chinese tourists and they do get upset very easily. Also they are one of the biggest importers of tat. Not only that, the aforementioned items are commonly practiced here so we may as well all join in. Apart from the defacing that is. Several years ago two Chinese men were hanged for steeling stone from the Great Wall to repair their home.
Life is your's to do with as you wish- do not let other's try to control it for you. Count Dusak- 1345.
Top

Dusak, I think you have hit upon why they should complain.

I think that they have far more to lose in export trade than Egypt does from their tourism.

My experience of Chinese people is the opposite of yours, ive been trading with them for over twenty years and the one thing I always say about them is you just cant upset them!

Ive vented a spleen at poor quality product or product not to drawing, threatened to withdraw business and all you ever get is "velly solly"

Perhaps from an individual point of view they may be sensitive but if anyone in the Egyptian government knew anything about trade (and ive yet to see evidence of that) I would be saying that behaviour of this nature is no way to repay an almost one way trade relationship.

Whats done is done I suppose and punishing the man wont change that but make no mistake, if there is a threat to trade they will make it very clear to any other visiting tourists what the consequences would be when they got back home.

Do the brothers care about the monuments though?

Again I have not seen any evidence of that, sadly.
Top

Its like going back to the days of Akenarton, whose carvings were decimated. What a stupid thing to do, both now and all those years ago...
Top

On Ponte Vecchio in Florence I admired an old door. Next to it was sign saying exactly what it would cost to write anything on it, and that was a lot of EURO.
Top

A 55 year city worker was caught defacing and vandalising stonehenge years back so every society has idiots....

You never know maybe Egypt can do a financial agreement with China, for the defacement of an ancient monument???
Top

Oh come on! The situation today is far better than in the past - go to any temple and see the graffiti carved (not scratched) in excellent typography by European travellers - Belzoni carved his way from Giza to Abu Simbel, defacing wall paintings at El Kab, like many others (especially British travellers). There is very little recent graffiti in any temple or tomb I've visited - in fact I can't recall seeing any.
I might agree with you, but then we'd both be wrong!
Stan
Top

Back in 1996 we were visiting either Karnak or Luxor temple (long time ago so can't remember exactly which) when we walked through a doorway just in time to see four Chinese youngsters, standing on each other's shoulders, gouging lumps out of the wall!

we were so gobsmacked that anyone could even think to do this that we just stood there and gaped at them for a minute or two! One of us then shouted at them but all they did was grin and carry on! Fortunately, a tour group then entered so they stopped.
Top

There is also grafitti in the hall of columns at Karnack which are recent, when i say recent i mean late last century/early this century.

If my memory serves the grafitti is in european language.

I think i have a picture somewhere.
Top

Placing graffiti on surfaces outranks prostitution as the worlds oldest profession. Can anyone besides Stan the man say with their hand on their heart that during childhood into teenage years non scratched ...... wuz 'er on any surface that took their fancy? I know I did. Its a kid thing and although deplorable through an adults eyes, will be uncontrollable for time immemorial. In another three hundred years people will be taking picture of this new addition after having it pointed out by the starship commander while visiting this once inhabited planet that destroyed itself by overlooking the more important life destroying events of the past. No one ever bemoans the destruction of the Dodo.
Life is your's to do with as you wish- do not let other's try to control it for you. Count Dusak- 1345.
Top

Dusak, you have obviously not heard of my Dodo appreciation society!
Top

What is a member of your Dodo appreciation society known as - a Doodoo? As in doodoo?

A DoDooer. Greek Dodooeriousexlemptiea. Latin doudadodorious.
Life is your's to do with as you wish- do not let other's try to control it for you. Count Dusak- 1345.
Top


The parents of a Chinese teenager who scratched his name into a 3,500-year-old Egyptian artwork have apologised for his actions after internet users tracked down the boy to name and shame him.


The 15-year-old, from Nanjing, was identified after a photo of his graffiti – which said “Ding Jinhao was here” in Mandarin – at the Temple of Luxor was posted online on Friday.

A microblogger named Shen, who visited the temple on the banks of the River Nile three weeks ago, cited the graffiti as an example of shameful behaviour by Chinese tourists abroad. The posting attracted a torrent of replies, including suggestions that the perpetrator be tracked down.

Investigators used the internet (known in China as “the human flesh search engine”) to trace Ding Jinhao and released his age, his school and other personal details. Hackers even compromised his former primary school’s website, forcing visitors to click on a sign parodying Ding’s graffiti before they could enter the site, the Global Times newspaper reported.

Ding’s parents admitted their son had defaced the artwork a few years ago but said he was sorry for his actions. “We want to apologise to the Egyptian people and to people who have paid attention to this case across China,” the boy’s mother told Nanjing’s Modern Express newspaper at the weekend.

Ding’s parents said it was their lack of education and supervision that led to his mischief. They said the attack happened when their son, now in middle school, was little. They were with a tourist group and did not notice when he scrawled on the sculpture, the mother said. “We have taken him sightseeing since he was little and we often saw such graffiti. But we didn’t realise we should have told him that this is wrong,” she added. She also implored internet users not to hound her son.

The boy’s father asked for his son to be left alone, saying: “This is too much pressure for him to take.” However, the Egyptian ministry of antiquities said the damage to the temple was superficial and it was being repaired.

The number of Chinese who can afford foreign holidays is soaring, and they spent £67bn overseas last year. Earlier this month, Wang Yang, one of China’s four vice-premiers, said the “uncivilised behaviour” of some Chinese tourists was harming the country’s image. Graffiti is relatively rare in China and there are laws to protect cultural sites. Punishments for intentionally defacing relics can involve a short stint in jail and a fine of up to 500 yuan (£54).

Anger over Ding Jinhao’s graffiti was also directed at Chinese authorities, who were accused of failing to protect ancient sites such as the Great Wall of China from polution and structural decay.

Another commentator, Yu Minhong, blamed the boy’s parents and said China was right to be ashamed by Ding’s actions. “When you go to every tourist site, you can see something like: “X has been here”. We feel ashamed if we do it abroad, why not in China? We should learn to protect our cultural relics and understand it is also a shame to write on our own faces.”
Top

Whatever the opinion is, young Ding has created a right Ding Dong of an objection.
Life is your's to do with as you wish- do not let other's try to control it for you. Count Dusak- 1345.
Top
19 posts • Page 1 of 1